A voice for New Conservative 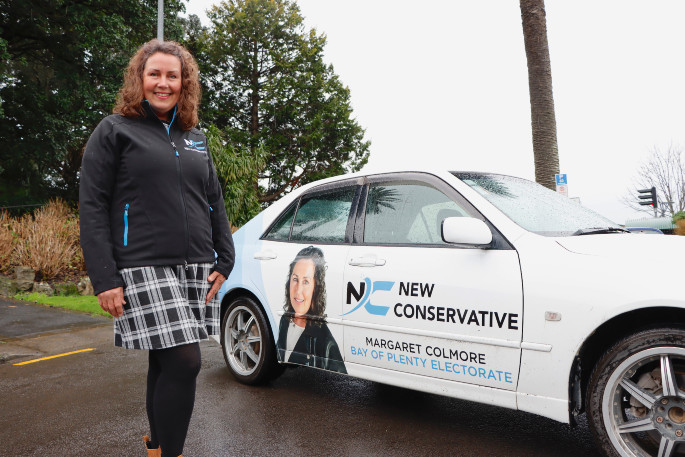 Margaret Colmore, New Conservative candidate for the Bay of Plenty.

I first met Margaret Colmore about 22 years ago, when she arrived from South Africa with her family in 1998 after sailing for about two years around the world.

She had seen many places but told me when she arrived in the Bay of Plenty, she knew New Zealand was going to be home.

She decided to run in this year’s general election as the Bay of Plenty candidate for New Conservative after recognising a pattern she had previously seen back in South Africa.

“I became concerned with the direction our country is being taken down with gender ideology being taught in schools, divisive policies that favour one race over another and increasing regulations being placed on farmers culminating in the Zero Carbon Act.”

She feels these issues are sabotaging our society.

“The science of climate change is being manipulated to bring about a global government to bring in socialism.”

Margaret says that New Conservative believes the billions paid to the United Nations as carbon tax can be better utilised in finding solutions to New Zealand pollution issues, such as replacing 1080.

“I decided to put my time and energy into New Conservative because of their focus on strong families, free speech, lower personal taxation, the value of human life, a reduction in state regulations, the emphasis on New Zealand’s sovereignty, efficiency in government spending and a greater attention to genuine democracy. These are all values that I stand for and support.”

“Without a strong family base, you're not going to have a strong stable nation. We have policies that will strengthen families, such as income splitting between husband and wife, so that they pay less tax.

“The first $20,000 of income will be tax free. We’re going to raise the tax brackets so that people can take home more.”

Margaret is keen to cut out bureaucratic red tape.

“Small business has a lot of unnecessary rules and regulations that are strangulating profit margins and the efficiency of business.

“We want to simplify regulations, which would make a huge difference to all businesses.”

The party’s housing policy too is about simplifying rules and freeing up land.

“We also want to bring back trades into schools so that youth can hone in on what they are good at.”

Margaret is one of 50 candidates standing for New Conservative, with about 85 per cent being business owners, and all pushing family values.

“All very good quality candidates who have been very well vetted,” says Margaret.

She believes the party is going to go a long way in this election.

“We've got the strongest ground swell support throughout New Zealand that we've ever had. So that's very cool. We want the party vote.”

The Weekend Sun and SunLive will be profiling candidates from various political parties over the next few weeks.

... for me on the Party vote, with New Conservative being a consideration. I won’t know until I get to the booth who I’ll actually be voting for. There are some good points in the article and I’ll be interested to find out more about them.

Correct. Their slogan "all lives matter" is the US White supremacist chant. Their other slogan "back to basics" reminds me of John Major. He then went onto do the dirty on his wife with Edwina Currie. These fringe groups are nuts. All frightened of the world and of different people. They gather in clubs of like minded to talk rubbish. Put hoods on and burn things. Yee haw.

Got my Vote too!

It is refreshing to have found a decent candidate/party for whom a big slice of the population will vote. ’Mein Fuhrer’ has said it all in a nutshell. I hope this fledgling party gets its policies out loud and clear to the rest of NZ in time for the election. Wishing you all the best Margaret.

These appear to be a bunch that would be better suited to 1930’s Germany. Than ND. Their policies are disgusting. The idea that single mom’s should be uplifted and placed in homes with other married couples. WTF

We need serious change away from this current "woke" culture infecting society, the gender insanity, the climate madness, the cultural marxism infecting the education system, the anti carbon lunacy, the anti White racism and so on,we need a NZEXIT from the corrupt United Nations. Goodbye to the current Socialist agenda polluting the minds of our youth.

Makes a lot of sense

They have secured my families votes just on this article alone. I hope other dissatisfied voters start to wake up and realise that there are more political parties with sensible policies that will change this country for the better.