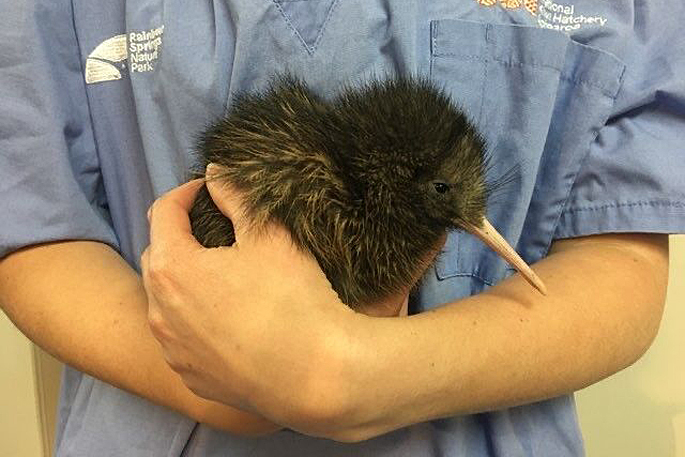 More than half of the kiwi in one of the country’s most prolific conservation initiatives failed to build second-clutch nests or produce an expected second set of viable eggs in the 2019/2020 breeding season.

As a result the Maungataniwha Kiwi Programme, run by the Forest Lifeforce Restoration Trust at its property in inland Hawke’s Bay, delivered 46 viable eggs to the National Kiwi Hatchery in Rotorua, down from 62 in the previous season.

Staffers at the Trust’s property in the Maungataniwha Native Forest monitored 43 male birds during this season, three more than in the previous year.

Some males abandoned their second-clutch nests in the early stages of incubation, or were not detected to nest at all.

The results were echoed by other kiwi conservation initiatives right across the North Island, according to the National Kiwi Hatchery. It incubated 125 eggs during the season, only 21 of which were second clutch eggs.

Manager Emma Bean says the notable downturn in second clutch nesting and egg production is likely due to extraordinarily dry conditions across the region in November last year.

“We believe that their failure to propagate was an instinctive reaction to the conditions at the time.

“Having produced a first clutch their need to look after themselves outweighed their need to produce a second clutch, and so that’s what they did.”

“It was very dry at Maungataniwha.

“We found more kiwi than normal living nearer the streams or in muddy conditions.”

The dry conditions also impacted the number of juvenile kiwi who were able to survive ‘creching’, the part of the conservation process where young birds are released into predator-proof areas to live and grow until they are large enough to fend for themselves and can be released back into the wild.

Of the 46 viable eggs collected as part of the Maungataniwha Kiwi Programme, 29 (63 per cent) resulted in birds reared to a size where they could safely be released back into forests.

This contrasts starkly with the five percent chance that kiwi have of making it to adulthood if their eggs are left in the bush unprotected against predators.

The eggs recovery work is part of the nation-wide Operation Nest Egg (ONE) initiative, where they’re retrieved from nests, then incubated and hatched under specialist care.

We need to do better on the predator controls. There’s no point in going to a lot of trouble to hatch eggs if it is not safe for them to go back to the bush.