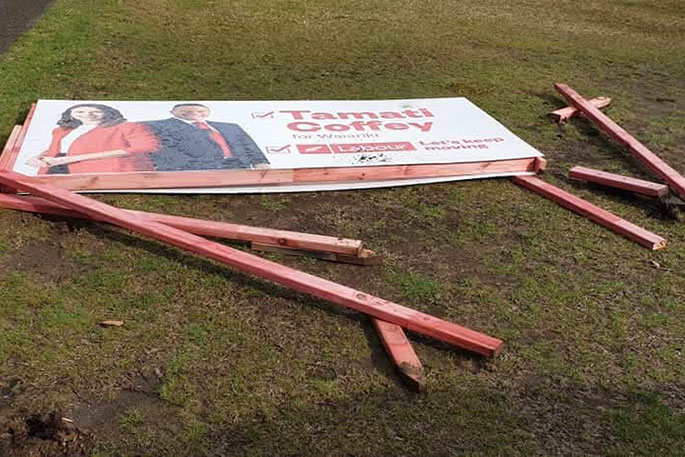 Some of Tamati Coffey’s hoardings vandalised in the Bay of Plenty. Photos: Tamati Coffey – Labour MP for Waiariki Facebook.

Vandals are attacking election hoardings in the Bay of Plenty.

One promoting Jacinda Ardern has been defaced with Nazi imagery, while Waiariki MP Tamati Coffey’s hoardings have either been stolen or ripped down.

Newshub reports billboards featuring the Prime Minister and Bay of Plenty Labour candidate Angie Warren-Clark on Parton Road in Papamoa have been covered in swastikas and had their eyes covered in spray paint, reports Newshub.

Waiariki Labour MP Tamati Coffey says his hoardings in Tauranga, Rotorua, Whakatāne and Taupō have all been targeted.

He says his first reaction was aroha for his volunteers who had been out all week doing the hard yards in the cold and, sometimes, dark. 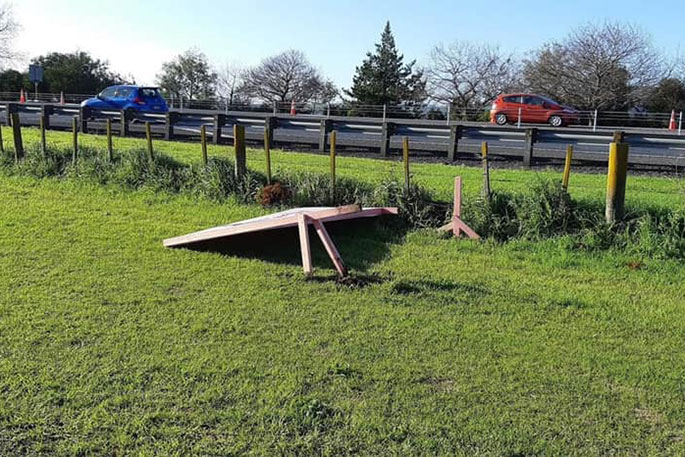 When asked why he thinks this has happened, Coffey says it could be for a number of reasons.

“Vandals, hate, wind, bored kids. Could be any number of things.”

Coffey is asking people in the community to be kind to other people.

“Have some respect for others.

... in the last two sentences. It is ironic to see people who never experienced the Nazi era using symbols from it. The whole point of Democracy is that you can express your opinion in a civilized way through the ballot box. Destroying pictures and signs because you disagree with what they represent is the action of someone who knows how to rage, but doesn’t know how to think. And that kind of suppression is exactly what the Nazi regime practised. Don’t tolerate any POV except your own. You don’t need options, just follow the mob and the glorious leader... Thank goodness they do eventually grow up.

More likely someone whom has lost faith in our leadership. Join the club.