BOP shooter gets a year knocked off sentence 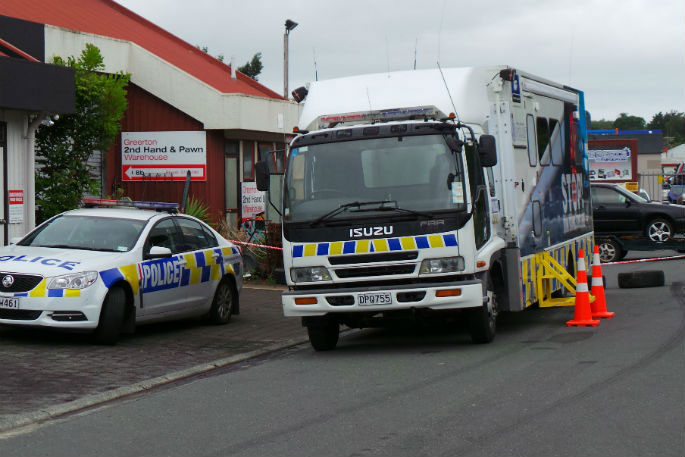 Police at the scene in Wilrose Place where they believe Lance was critically injured.

A street-level drug dealer who fatally shot a gang enforcer has had a year taken off his prison sentence.

Colin Jefferies-Smith was convicted of manslaughter for shooting Lance Wayne Waite – a senior member of the Notorious chapter of the Mongrel Mob – twice in the back in Tauranga in 2018.

He was willing to plead guilty to manslaughter more than a year out from the murder trial but the Crown wasn't formally told, meaning he missed out on some of the sentence discount for an early guilty plea.

Jefferies-Smith had been trying to retrieve a car Waite had taken as a tax when he fired the fatal shots at the Greerton 2nd Hand and Pawn Warehouse, known as the Trap.

He was initially jailed for nine years for manslaughter, but that was dropped to eight years on appeal.

The other part of his sentence – two years on drugs charges - was not part of the appeal.

There was a “lack of formal communication with the Crown” on Jefferies-Smith’s willingness to plead guilty, Justice Patricia Courtney’s Court of Appeal judgment said.

Given the Crown case, “conviction for murder was quite possible and for manslaughter highly likely”.

“It was incontrovertible that Mr Jefferies-Smith had shot Mr Waite.”

Jefferies-Smith acknowledged that from the start but said he’d done it in self-defence - though Courtney said that argument was unlikely to succeed because Waite was shot from behind.

Still, Jefferies-Smith had been willing to plead guilty to manslaughter at least a year before the May 2019 trial.

That should have got him a 20 per cent discount instead of the 10 per cent he was granted, Justice Courtney ruled.

Jefferies-Smith's nine-year prison sentence for manslaughter was changed to an eight-year sentence.

I read this and it just seemed to be a load of unnecessary stress and violence. If I was aspiring to be a drug lord (I’m not...), would I really want to live in such a world? As described, it seems like a scene out of a bad movie and you have to ask how much influence such films are having on some sectors of the population. Two kiwi lives wasted. It’s sad.

Just pointing a gun at someone shows intent to harm that person so to actually fire that gun means you intend to kill them. Criminals who use guns should have any sentence increased certainly not reduced.