A lifetime of service to Whakatāne Hospital 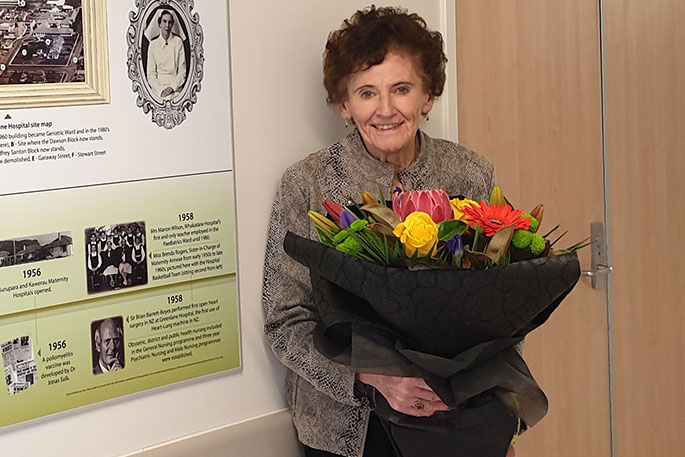 Rona Stanley, who’s retired after 62 years, standing beside the history panel at Whakatāne Hospital that she had a hand in creating.

Rona started working at the hospital in the Supply Department on Monday, May 12, 1958; she worked in various roles for the next 62 years, until she retired recently during the COVID lockdown.

“When interviewed for positions back when I started, you had to have a chest X-ray and polio vaccine, it was compulsory due to the polio epidemic,” says Rona.

She’d only been in her first job at the hospital a few weeks when she was called into the Board Secretary’s (the CEO’s) office.

“He advised that the hospital was purchasing a Canon accounting machine, and I was to be the operator.”

This consisted of general ledgers-payroll and later stores. Rona continued in this role for 12 years before transferring to the Chief Executive’s Office in the late 1960s.

As PA/Secretary to CEO Kevin O’Leary and chairman Godfrey Santon, Rona was involved in the planning of the ‘new’ five storey hospital building named after Mr Santon which opened in 1974.

“I did all the clerical work for the clerk of works Phil Ashman, engineer Norm Lovegrove and the works supervisor Harry Lowe, so this involved me greatly with the build.

“I saw how much work Godfrey put into that build, so it was quite sad when it was demolished making way for the new buildings which we have today.”

The workload Rona endured as Board Secretary was intense, compared to today’s standards.

“There were no photocopy machines. Board agendas were typed on stencils, clipped onto a Gestetner duplicating machine with great big tubes of ink. You had to wind the machine for each page and be careful not to get the ink over your clothes. It was hard work.”

But Rona was no stranger to hard work. For many years she started work at 4am working through to 3pm.

One of her former managers once awarded her a ‘Workaholic Certificate’ which she proudly displayed in her office.

She was the first employee to have a Golf Ball typewriter, moved onto a word processor and then in the 80s computers.

For many years she worked in the supplies department.

“Back then, there was a lot of research involved in searching for products for the hospital. There wasn’t a ‘National Purchasing System’ as there is now. It was busy; sales reps would be queuing outside your door trying to sell their products. It was great.”

Rona was born at Whakatāne Hospital and by her own admission, the hospital was her life.

“My dad used to deliver slack, a type of coal to the Boiler House, and as a child I used to come with him; so the place was always familiar to me.”

Later, in the 1987 Edgecumbe earthquake when the hospital stairwell flooded forcing the patients to be evacuated, Rona’s dad was called on again.

A wealth of knowledge, Rona has many fond memories of people and funny stories to tell.

She recalls in the early 1960s when the Christmas float parade was held on New Year’s Eve. She was allowed to decorate the lone hospital vehicle, a truck.

“The truck was decorated in Hydrangeas in full bloom. We spent days gathering them and stuffed them into toilets in the hospital and used the fire hose to keep them fresh – much to the cleaners disgust.

“The truck was covered in hydrangeas with just a small space for the driver - Fred Day, the hospital house manager.

“He drove the truck all the way from Stewart Street to the Commercial Hotel on The Strand and back again with Peter Wales, the hospital storeman lying across the bonnet giving him directions.”

Rona and her colleagues dressed as geisha girls sat on the back. They took first prize winning 70 pounds for their efforts.

“Fred said ‘tell the boss to shout.’ He did, he shouted us six cakes.”

Rona’s seen many people come and go and many changes in her working life at the hospital.

“It was a totally different environment back then. Morning and afternoon tea was supplied, a scone in the morning and usually a sandwich in the afternoon. We addressed each other as ‘Mr’, ‘Mrs’, or ‘Miss’ followed by surname. Not by our first names, that came much later in the 70s.”

Calling someone by their first name, sounded odd and it was quite an adjustment for Rona and her colleagues.

She says the best managers she’s worked with are the ones who’ve been fair, take an interest in their staff, listen and take action.

“When I’d been at the hospital for 50 years my supply manager in Tauranga, Don Shewan jumped on his motorbike came here and took me out for lunch – it’s things like that, which matter and I really appreciated it.”

Aside from the incredible 62 years of service to Whakatāne Hospital, Rona leaves a lasting legacy; being a key contributor to the history wall panels scribed in the hospital corridors. A project she enjoyed, and captured for future generations.

Dr Ashley Bloomfield describes Rona Stanley’s contribution to the hospital as, “an amazing length of service and quite possibly unparalleled in New Zealand”.

Ashley was a trainee intern at Whakatāne Hospital in 1990.

"When I did my paediatrics attachment as a trainee intern in Whakatāne in 1990 (with Chris Moyes), Rona would have already been there for 32 years - longer than my career to date!

"Thank you Rona for your dedication and hard work that will have helped so many people, and I wish you all the best for your retirement.”