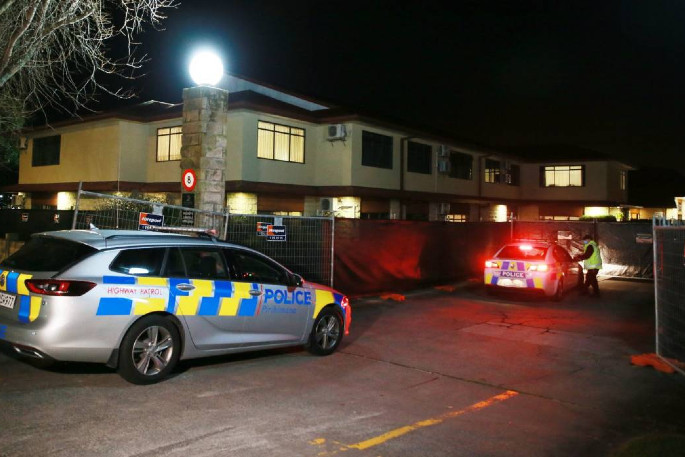 Four of the escapees were found and detained by 7.50pm on Friday and had been returned to the hotel. The fifth was detained later after a manhunt. Photo: Mark Taylor/Stuff

The fifth and final person who absconded from managed isolation in Hamilton last night has been found and detained early this morning.

Four of the group who left the Distinction Hotel on Garnett Ave were captured, however, one teenager remained at large late Friday night.

Police confirmed shortly before midnight the outstanding runaway was still at large, although they were continuing to scour the city for him.

One person was seen leaving the hotel over a fence about 7pm by the on-site police officer, who immediately took action to locate and apprehend them, says Air Commodore Darryn Webb. Further efforts to find and return the rest of the group to the facility started immediately.

Four people were found and detained by 7.50pm Friday and had been returned to the facility.

One, a 17-year-old boy, was still outside of the facility as at 9.40pm Friday, and police were continuing to look for him, says Webb. A police helicopter was involved in the search.

At about 9.45pm Friday, police in Hamilton became engaged in a high-speed pursuit of a car through the city's eastern suburbs. That incident tied up many officers and it turned out to be unrelated to the runaways – however police continued to search for the outstanding absconder well into the night.

A short statement from Air Commodore Darryn Webb has now confirmed the 17-year-old boy was located after the major manhunt.

The escapees are not the first to allegedly abscond from the facility.

Previously, Martin McVicar allegedly escaped the same premises to visit a liquor store. He was arrested after allegedly cutting through fence ties to break out of the facility.

Hamilton woman Deborah Cuming lives near the Distinction Hotel. Her home neighbours her 88-year-old father’s property, which backs on to the hotel.

After the first breach, she said they had felt “really reassured” that everything had been done to tighten up security - “But now it feels like we were lied to.”

“It’s not as secure as we were all led to believe and that’s just not acceptable.”

News of the incident was met with an angry response from Hamilton's deputy mayor Geoff Taylor.

"They have forced these quarantine facilities on us, and they are incapable of securing them as they should to ensure the safety of Hamilton citizens.

"It's not good enough. The city deserves better."

The Minister in charge of Managed Isolation and Quarantine facilities Megan Woods condemned the absconders, saying they are putting New Zealanders at risk.

“The speedy apprehension of four of the absconders highlights the importance of the police presence at our facilities,” she said in a statement issued late on Friday.

“This is incredibly irresponsible behaviour by this group. Our only chance of stopping community transmission of Covid-19 is by containing all potential cases at the border, and we are doing this successfully through our managed isolation system.

“People absconding from facilities before they have completed their isolation and returned negative day 12 tests are endangering the health of other New Zealanders and our Covid-free status in the community.

“Everyone has to play by the rules. These people knew the rules and chose to break them and will now face the consequences.

“While this group all tested negative on day 3 there is no room for complacency. Earlier this week, a person who had a negative test at day 3 later had a positive case at Day 12. We will be re-testing this group and anyone they came into contact with.

“All returnees need to be considered at risk of carrying Covid. Internationally this pandemic is growing, not slowing and we constantly review these cases to see if there are any further improvements we can make to ensure people are not breaking out.”

I agree with you there is an overreaction here but that doesn’t alter the fact that we need to do better. One point you made, set me thinking and that was the fact that there was previous mingling without testing and, so far, we have no consequences. Were we just lucky, or is there a swell in the community, as yet undetected, that is about to break as a second wave? I agree with you about the politicking, but I disagree with using Oz as an example for the wealthy being exempt... At the moment, Australia is chaos and you wouldn’t want to be there. This whole border issue is SO critical that we need to raise our game. No politics, just sensible and realistic action. I believe Education is the key...

How many of the flapping “follow the rules” brigade break the speed limit on a daily basis? Speeding kills hundreds every year in this country and I haven’t seen a Kiwi driver yet who doesn’t routinely break the limit, tailgate and generally drive like a muppet. Hypocritical dimwits.

“As dangerous as ISIS!” That’s funny. Have they chopped somebody’s head off or blown a bus up? You’re talking rubbish. As for “sending them back“, I do believe they are kiwi citizens over from Oz. And as we know, this is where Oz sends its rubbish. The authorities say “play by the rules” but what are those? There have been 100s of exemptions granted to others. But not these people. In Oz you can self isolate at home if you are a celebrity or have money. A few weeks ago we were sending people on their way early and with no testing and they had all been mingling in so called isolation. And we have no cases. So it seems the “rules” change to suit. It’s no longer a health & risk management issue, it’s just politics and trying to appeal to overreacting dimwits.

… by the general harsh responses here, even though I share the frustration. It is painfully obvious that some returnees just don’t get why we are taking such measures, or they consider their personal wishes more important. We know it is hard when you want to attend a funeral, but many had to cope with it during lockdown. We definitely need to make sure that the returnees are properly informed on the legal, social, and moral implications of breaking the quarantine. I like Kumera’s suggestion that they must pay and start over.

The public need to be less focused on blaming the government for these ungrateful hooligans that don’t hesitate or give a damn about causing huge threat to all of us that put in all the hard work to get us where we are. None of them did that. All they have been asked to do to be allowed to come home to nz is agree to stay in a room for 2 weeks all expenses paid for. These people must repay however many days they stayed in the given accommodation then they must start there 14 day stay again in a less accommodating facility that is most importantly secure. They can have 14 days to think about what they did. From now on Future returnee’s need to sign papers that this is what will happen if you do not follow the rules.

So they wanted to attend a funeral. Well so have lots of people but couldn’t as they were in the team of 5 million. Likewise weddings and even dying relatives that couldn’t be with because of the lockdown . So these entitled sods think they can do as they please even after being told they couldn’t and at our expense and then waste police time in a major manhunt. Hope the courts don’t get all PC with mitigation and sympathy for their selfish actions. My friend couldn’t have a funeral at all for his father so why should they think attending one after coming into the country knowing the rules?!

It only takes these type of people to put us back in lockdown.Do we have to have a personal minder for everyone in isolation.

On top of quarantining them, who pays for their flights home - them or us? Is it heavily subsidized by NZ?

Not just a significant cost to the country to quarantine these morons but a significant cost and strain on resources to capture them. I agree wholeheartedly with Hapukafin to jail them and then send them back to where they came from thus sending them back with a criminal record. Can hardly describe them as ’kids’ although I can think of a few other descriptive words for these self entitled morons. How dare they come back to our country and treat us and threaten us like that. There should be a REAL CRAPPY facility set aside for escapees only.

How about releasing prisoners and putting them in the hotel’s ( they can probably be trusted more to stay in hotels) and put people returning to NZ in the prisons for 14 days.

Aholes! Put them in jail for a month and charge them for their time in isolation and time in prison. Absolute morons!!!

jail them and send them back to where they came from.

Dispicable . Put them in isolation in jail, hotels are too good for them. Costs the country thousands for each one of them the be in quarantine and yet they are too stupid to understand and comply. If they can’t obey the rules they shouldn’t return to NZ