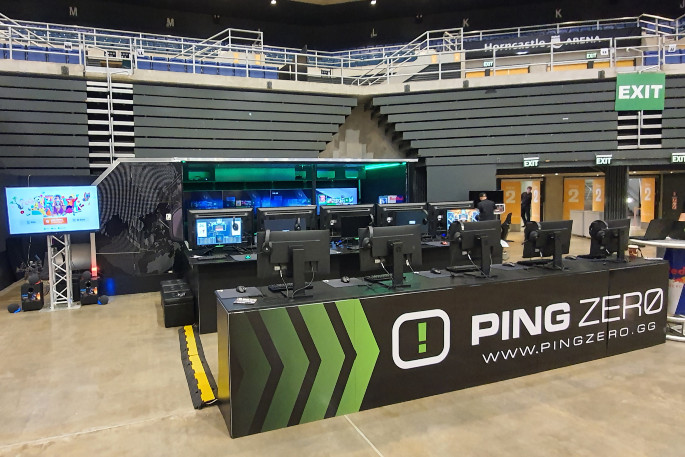 The Ping Zero trailer folds out to become a gaming station kitted with 10 PCs, 10 consoles, two race sets and a screen for Just Dance – that’s enough room to have about 30 people playing at once.

Ping Zero managing director Conrad Ware says the gaming trailer experience at an event like Armageddon mimics that of an e-sports tournament, as players feel the pressure and excitement of playing in front of other people.

E-sports has boomed in recent years, with Forbes reporting the industry is worth more than $1billion.

The tournaments see professional gamers play in front of full arenas around the world, for hefty cash prizes.

E-sports aside, Conrad says the main purpose of the Ping Zero trailer is for people to enjoy themselves.

“It’s all about participants having a great gaming experience,” says Conrad.

The trailer provides an opportunity for the Ping Zero team to talk to parents about gaming.

“We want to encourage parents to learn more about what their kids are playing.

“If your kid does ballet, you tend to know the difference between position one and position two, but with gaming, there’s often some disconnect there.

“Learning what the numbers on the screen mean and talking to your kids about what they’re doing is a great opportunity to share an experience with them – just as you would if they were playing a sport.

“It also makes it much less confusing when they start doing a dance from Fortnight.”

Conrad has been putting on gaming events for 17 years, and gaming himself “long before e-sports was a thing”. He’s passionate about giving gaming a good name.

“At the trailer, you see kids communicating, problem solving and learning new things – there are many benefits to it.

“With gaming it doesn’t matter what gender, race or religion you are – it all comes down to your skill.

“The online arena has a long way to go when it comes to trolling others and respecting female players.

“But, seeing the new generation of gamers coming through, I’m confident my nine-year-old daughter will get to game in a much more positive environment.”

Armageddon is the ideal place to celebrate the pop culture games have created, says Conrad.

“People get so invested in the world of a game, and spend hours dressing up like their favourite characters for Armageddon.

“Getting to spend the day with likeminded people who love the gaming world is awesome. I have the best job ever.”

Tickets for Tauranga Armageddon are still available to purchase here.