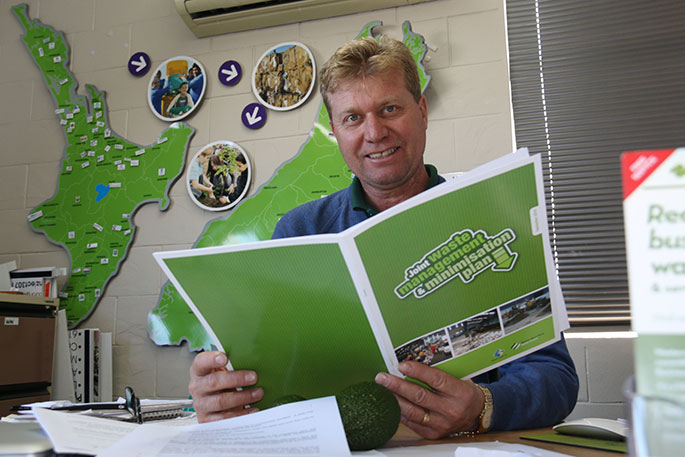 Marty Hoffart pictured here in November pitching the idea of a waste levy.

The Government’s proposed $124 million investment in recycling is a “win for employment, climate and environment” says a local waste campaigner.

Bay of Plenty garbage guru Marty Hoffart, now chairperson of the Zero Waste Network Aotearoa, is calling for more action from the Government on a waste levy.

Marty says the plan contains “bold and important steps” that will create employment in communities right throughout the country, reduce emissions and address the crisis in plastic waste and food wastes.

“People across the country know that recycling is not working. The $124 million investment will build onshore capacity for real recycling.

“We don’t want to see more recycling going to landfills and don’t want it shipped offshore to pollute other places.”

He says the country needs to build its own systems to deal with the “valuable resources that we currently call ‘waste’.

The Government’s plan will see a big increase in dumping fees at landfills for domestic and commercial users.

Over the next four years, it will progressively increase the levy rate for landfills that take household waste from the current $10 per tonne, to $60 per tonne with the first changes to take effect from July 1 2021.

“Current economic conditions will be considered before implementation timelines are confirmed later this year,” Eugenie says.

“New Zealanders are proud of our country’s clean, green reputation. Yet rubbish disposal to New Zealand’s municipal landfills increased by a staggering 48 per cent in the last ten years. We can’t allow this situation to continue.

“We need large scale and urgent action because much of what is currently sent to New Zealand landfills could be recycled, composted or reused.”

Marty says reuse and recycling are major job creators. It provides opportunities to use materials and builds community resilience to change.

“Resource recovery is the future. Landfilling and offshoring waste are not.”