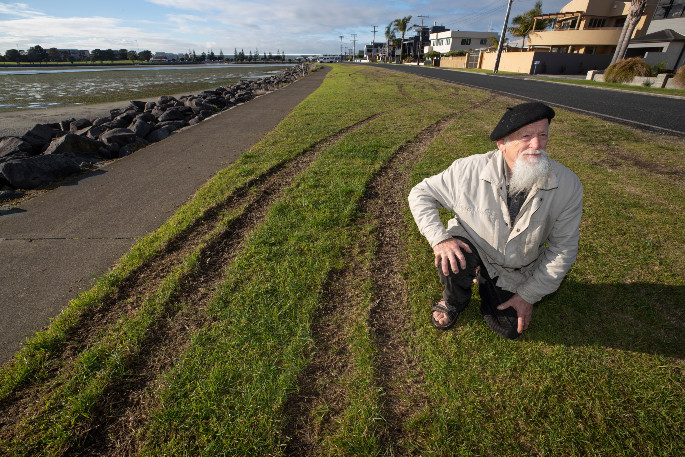 Berms along Harbour Drive in Bureta are continually turned into muddy messes – and residents say it’s no accident.

“Cars intentionally race along the verge, which is about 15 metres in width,” says Geoff Ellett, who lives on an adjacent street to Harbour Drive.

“This completely destroys the grass and puts mud all over the footpath, leaving a big mess for residents to clean up.

“It has been going on for some time now, but has picked up again in the last few weeks since we’ve had some rain – probably because it’s better for skids.”

Geoff says people living on Harbour Drive have heard racers as early as 3am.

“I spoke to a resident recently who is in their 70s, and is being woken up by racers at all hours,” says Geoff.

On behalf of residents, Geoff is in discussions with Tauranga City Council to find a solution. Suggestions include installing cameras so racers can be identified and reported to police.

... there is a funeral at the church near my place, my neighbours and I get people parking on our berms. I don’t mind. It is infrequent and people are only doing it because the normal street parking can’t cope. Most people prefer NOT to park on someone’s berm. But in the cases described in the article it is way out of order. Bollards are the obvious solution, but they make mowing the strip more difficult. Camera are a better deterrent, but as long as it is legal to park there, there’s not much that can be done. Anybody "boy racing" at 3:00 am in a residential area, whether on the road OR the berm, should be arrested. (For disturbing the peace, if nothing else.) Residents should call Police.

If you think that’s funny . . . Your absolutely right. Hit the spot. I cracked up laughing. I love it. Parking too shouldn’t be allowed on our berms. We look after them at our cost and time only for someone to come and park all over it and chew it up in the wet. Then you get morons like this who haven’t got a brain to give others a thought. It’s time TCC stopped the parking on berms.

Install a few bollards along there, simple, watch them skid it up with a smile on your face knowing within seconds they are about to have their sump removed :)