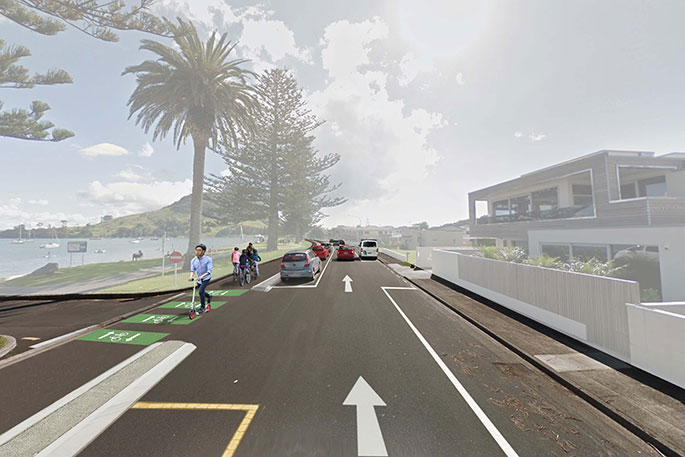 An artist’s impression of what Pilot Bay would look like during the trial. Supplied image.

Tauranga City Council is calling on community members to register their interest in a new Mount Maunganui trial, named ‘Innovating Streets at the Mount’.

The project aims to enhance the way people move around on the streets in the north Mount Maunganui area and will be developed in close collaboration with local residents and businesses.

While various ideas have already been suggested, one of which is a dedicated cycle/cruiseway along Pilot Bay accompanied by a one way traffic system, council says nothing is set in stone yet.

Tauranga Mayor Tenby Powell says Mount Maunganui is one the most popular spots in New Zealand, with high numbers of people in cars, on bikes, on foot and other modes of transport, but there is also limited space.

“Innovating Streets at the Mount is all about taking up a great opportunity to test some quick, creative, low-cost and temporary street solutions, with direct involvement from the community in their design.”

A Pilot Bay resident has several concerns regarding the proposed trial.

“We do not have enough cyclists to justify disrupting all of the traffic caused by this idea. I really don't think that it will encourage more people to get on bikes.

“There are more cyclists over the summer time, so for the rest of the year the cars have to be inconvenienced by the one-way idea.”

Parking in the Mount area has also been an issue, particularly in the summer months.

“One of the things people coming to the Mount complain about is parking. Having one way traffic means people can't get back to a park if they see one become available.

“If people need to go back along The Mall then they have to go back down Maunganui Road and back through the main shops, making the roundabouts and streets busier in the already congested area.

“It mentions a calmer environment on the pamphlet, when people are messed around, it makes them more frustrated.”

Powell says the aim of the proposed trial is to make the treasured, but busy area as people-friendly and safe as possible, with better facilities for moving about and for recreation.

“The lockdown due to COVID-19 gave many of us a new experience of using public spaces at the Mount.

“We would like to learn from this and see if there are any ways to enhance this area and make it more available to a wider variety of users.”

Community engagement is planned to start in late-August and will allow people to contribute to this project throughout its lifespan.

In order to enable the co-design aspect, a community design group will be formed to help guide the direction of the project, while the wider community will also be able to provide feedback to the plans developed.

Council will use the learnings and insights from an earlier proposal in 2017/2018, which considered a similar area.

That background information will be combined with new community input to develop a plan that will be implemented as a temporary trial before mid-2021.

Costs for the total works are estimated at $1m + (ex GST), of which Waka Kotahi is funding 90 per cent and Tauranga City Council 10 per cent.

For more information about the project, visit www.tauranga.govt.nz/innovatingstreets. Anyone interested in being involved in the project is asked to register their interest by emailing haveyoursay@tauranga.govt.nz

Leave the mall alone, How could council be trusted with anything to do with roading alterations ! Why do I have to drive a loop and over numerous speed humps, through town just because the mall gets busy for 6 weeks over christmas. The speed limits 30kms and reduces the danger for cyclists. VERY FEW BIKES USE THE MALL ANYWAY. Hardly any during the year and they use the boardwalk anyway. Council need to actually sit down the mall and count the lack of cyclists, Bring a book to stay awake. One million bucks, Its totally unnecessary

Anonymous IguanaEstate contributes lies, writing in regards the walkway ’... Colleen Spiro and Murray Guy’s best attempts to scupper ... In an effort to divert attention from the reality of selfish greed that undermines other road users, puts them at risk. Colleen Spiro (and many others) had grave concerns in regards the TCC walkway design. It was this we vehemently opposed. The design impacted hugely on the green event/picnic space, located directly adjacent the eroded sand edge, separating events, picnickers from the sand and water. The Waka folk to be removed from waters edge, relocated to the Camping Ground. Consultants advised the most durable, cost effective path, most friendly for the mobility impaired, wheelchairs, was decorative concrete - Winning the day, a timber walkway, double the cost, treble the maintenance? WHY? As it was preferred surface for joggers. Selfish greed breeds lies.

I wonder what the people of Tauranga ever did to Powell for him to purposely try to muck up everything that has worked, and is working very well in this area. Lets hope the other council members have not been infected by his preposterous ideas! Is there any way we can ’sack’ this interloper?

it’s not even worth commenting on this gross incompetence. kindergarten kids would come up with something better than this

If It's Not Broke

Don’t Fix It. What a traffic movement nightmare this would present. Another Greerton horror story in the making. I apologize Mayor Powell but this time I categorically disagree with you. To make it people friendly - what isn’t people friendly about it. To make it safe as possible - I’ve never seen an accident there, never seen an incident on the boardwalk or the grass or the beach or the wharf. Better facilities for recreation and moving - it has a beautiful wide boardwalk, expansive grassed area, great wharf, bbqs, seating, toilets and let’s not forget the stunning beach itself. For such an area there will never be enough parking in Summer unless you go highrise and don’t even think about that. Council destroyed Greerton, don’t destroy our iconic NZ waterfront. The happiness belongs to and is deserved by the people. HANDS OFF - DON’T TOUCH.

This would be awesome. Look at what the walkway has changed the bay into a picnic and family friendly area. Between Colleen spirio and Murray’s guys best attempts to scupper both of these ideas when living in welcome bay. The more cycle and friendly place we can make it the better it will be!

Leave the Mall as it is. It has worked well for a the last 50 years that I know of.Now the council want to create a mini surfers paradise. Angle parking wont work as you will have people trying to back out into the one way traffic flow and residents wont be able to get out of their driveways and then there is emergency vehicles that wont be able to get to an accident or a house fire because of this councils idiotic thinking. Save money by leaving the Mall like it is but get back on to dealing with all the roads that need attention of the masses like the Greerton one lane traffic and other roading disasters like 15th Avenue etc and stop coming up with cock-ups that end up costing the people more money to fix up again.

The 2 way cycle lane concerns me. It presumes Kiwi cyclists can follow lane etiquette. Unless they are a different breed to Kiwi drivers I fear there will be head on carnage.

Agree with the Professor,the council has already made up it’s mind.Why has this been raised again after being rejected 2 years ago?The council didn’t listen to the residents over the downtown carpark and look at that stuff-up.This is being pushed by the Bike Mount group with the help of councillor Heidi Hughes and obviously senior council staff with not a lot between the ears.Hopefully current councillors will realise that if this proposal goes ahead Mount residents will not forget it at the next elections.

Council never ceases to search out new ways to make our congestion worse. I wonder if part of the expense will go towards a new document shredder, to get rid of the pesky majority of submissions which will oppose the scheme?

What a ridiculous bloody idea and what an inconvenience to people in vehicles and the residents. It makes you laugh when Council go out for consultation......the decision is already made and they are just going through the motions. This will never be rejected now because the idot who came up with the idea won’t be made to look like a dick.....he or she will have the support of the other clowns in the Council. And, when are cyclists going to start contributing financially to all these ideas doing their rounds in the wider BOP?

If you don’t want a Greerton village like débâcle pay attention to or make submissions otherwise the design will make things worse.

forget the cycle way. Most tide along the board walk. Make it one way with angle parking facing the sea. We need more car parks, not less