Whakatohea set to settle with Crown 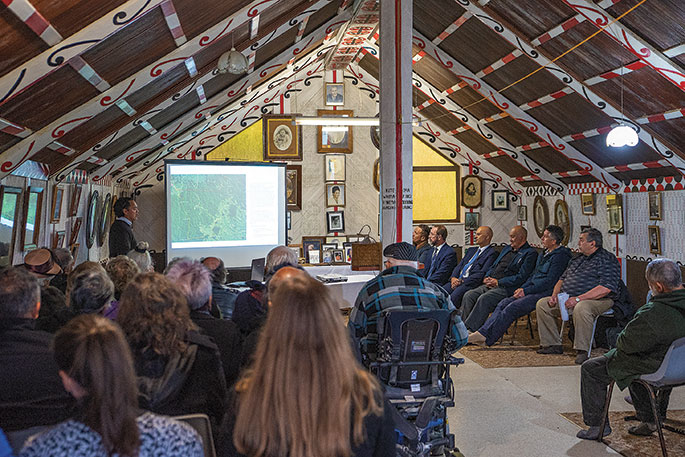 Whakatohea and Crown representatives, including Andrew Little, gathered in Waiaua Marae wharenui to discuss how the past can be made right. TROY BAKER / WHAKATANE BEACON

The imminent settlement between Whakatohea and the Crown is not the end of their relationship, but rather marks the beginning of its restoration, says Andrew Little.

The Minister for Treaty of Waitangi Negotiations met with the Whakatohea Pre Settlement Claims Trust, Whakatohea iwi members and hapu leaders at Waiaua Marae outside Opotiki yesterday to discuss settlement negotiations with the aim of initialling a Deed of Settlement later this year.

Whakatohea is in the unique situation of negotiating a settlement as well as engaging in Waitangi Tribunal proceedings in parallel. It is the first iwi to do so.

After being welcomed to the marae, Mr Little was treated to some kai before korero began in the afternoon.

Danny Paruru and Muriel Smith-Kelly opened the talks by discussing the wrongs inflicted upon the iwi by the Crown in the past.

Danny says before colonisation, Whakatohea had mana whenua over 491,000 acres of land but now, following raupatu, only 15,300 acres still belonged to the iwi.

He says Whakatohea hapu were forced from their land into the Opape Native Reserve, a reserve allocated for “rebels” who had surrendered to the Crown.

“A white man rode on a horse with gun and whip in hand to lead our people here."

Danny says all the hapu were forced onto unproductive land, which used to belong only to Ngati Rua.
As famine set in, so did fights amongst themselves for the inadequate area of fertile land.

Muriel says she is a “product” of the native reserve and reiterated Danny’s point that only 20 per cent of the land they were forced onto was usable for growing kai.

She says if some of the land hadn’t bordered the ocean, many more would have starved to death.

“The first people (pakeha) that came to Opotiki could scarcely believe their eyes, as they looked around. They saw our bridges, our roads and kai for miles.

“They couldn’t work out how we had done it as we were brown.”

She says her people were too successful for the Crown and so it did “crushing, hurtful” things to them.

“We were a strong warrior race; we were used to defending our borders as we had a perfect place we had to protect.

“That was okay until they came with guns and we had patu and taiaha.”

Muriel told the story of a nanny she knew who kept vegetable gardens and orchards across her land in an effort to prove she owned it to the pakeha, who often took land they deemed unused.

She says raupatu didn’t just take the iwi land, but also its knowledge and spiritual connection to the environment. 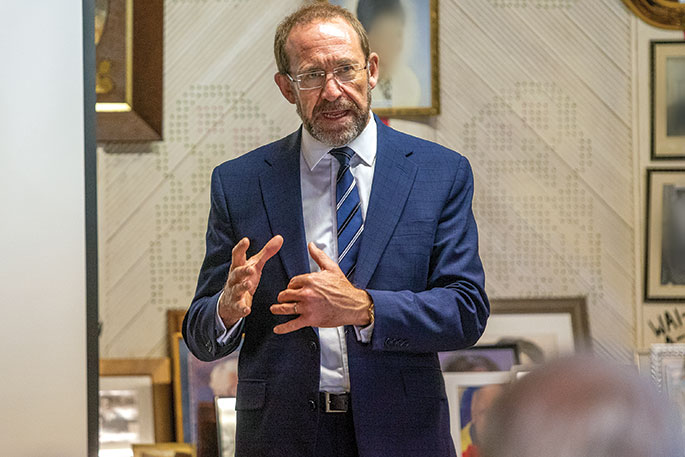 Minister for Treaty of Waitangi Negotiations Andrew Little said Whakatohea’s settlement should be initialled by the end of the year. TROY BAKER / WHAKATANE BEACON.

Andrew says he appreciates the history recounted by the two speakers and said in his role as treaty minister he had been receiving a rich education in the history of Aotearoa, which had not been told for so long.

Andrew says it's important the Waitangi Tribunal hearings continued alongside the settlement process as it allowed for these stories to be told and recorded.

He says these stories had been buried but the iwi still carried them and the mamae (hurt) of what happened in its heart.

In response to questioning, Andrew says stories like these will inform compulsory New Zealand history classes in schools going forward.

“Settlement sounds like it is the end of something, but really it is an agreement over the Crown’s failures in its Treaty obligations.

“Settlement is not the ending but is a beginning of the restoration of a relationship.”

Andrew says there are still some loose ends to tie up in regard to the settlement and he expected it should be finalised before the end of the year, whether or not he was still the minister following the elections.

When the deed of settlement is initialled it will mark the end of 25 years of Whakatohea settlement negotiations.

The settlement will then contribute to a brighter future for the iwi and its hapu.

Following the korero at the marae, Andrew was taken to key historic sites in the area before talks resumed privately about the iwi and Crown’s aspirations for the future.

So, the stories are going to become compulsory NZ history for the future? No balance, no independent sources for verification, just a narrative that suits one side. If the Crown abused these people then reparations should certainly be made, but let’s not forget they were at war, and they lost. Raupatu was punishment for their rebellion. Nevertheless, its time we all got over it and there should be fair compensation, in a spirit of goodwill on both sides. It’s better to be burying the hatchet in the ground than in each other.