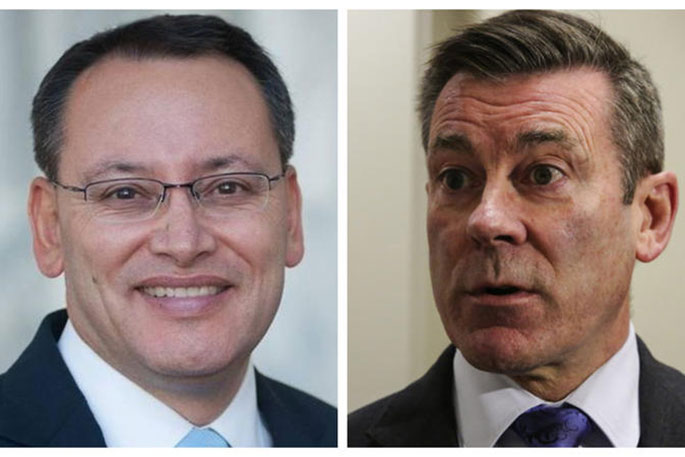 New National leader Judith Collins has stripped Michael Woodhouse of the health portfolio because of his involvement in the COVID-19 data leak saga.

Dr Shane Reti will replace him and has been promoted to the front bench.

Speaking to media this afternoon, Collins said she would be announcing a reshuffle tomorrow.

She says Woodhouse is a competent, hardworking MP and that she has confidence in him.

"Michael Woodhouse I believe is delighted with the outcome. He has been given two great portfolios.

"I have no doubt at all that Michael will never make that mistake again."

She says the country will have to "wait and see" about diversity in her front bench.

Collins says the National Party base is "all right thinking people. Love them".

She says she has not heard from Winston Peters since she was elected leader of the National Party.

Woodhouse is tangled in the COVID-19 leak saga, revealing last Friday he too had received private patient details from National stalwart Michelle Boag.

Woodhouse did not tell the party's former leader Todd Muller that Boag had sent him four emails containing the private information for two weeks and deleted the data the day a State Services inquiry was announced.

The leak had already cost one National MP their political career - Hamish Walker announced he wouldn't be standing in his Clutha-Southland electorate at September's election, after he last week fessed up to leaking the private patient information, sent to him by Boag, to the media.

Earlier today, National's new leader Judith Collins said she would "look at the facts" and speak to Woodhouse today before deciding his future.

"I'm absolutely not at all comfortable with it [the leaks]," says Collins.

"I thought it was extraordinary and I've never seen anything quite like that. I'm taking this very seriously."

On his way into Parliament this morning, Woodhouse was asked if he was worried about losing the health portfolio.

"I'm looking forward to another good day and I'm sure I'll be having a chat with the leadership team and the caucus," says Woodhouse.

Dr Reti, who is ranked number 13 on the party list, is National's associate health spokesperson and has been widely touted as the man to take over the portfolio.

But he says whether he is given the portfolio is ultimately a decision for Collins and the leadership team.

"However I can help New Zealanders, that is what I would like to do," says Reti.

National MPs stick to their plans

National MP Amy Adams' plans to contest September's election appear to have not changed under the new leadership.

The Selwyn MP cancelled plans to retire in May to instead take the number three spot in the party's shadow cabinet under Muller.

Adams is the party's COVID-19 recovery spokesperson, a new portfolio created by Muller.

She says she intends to stay on at Parliament.

"Oh look I'm very happy with last night's result and for me nothing has changed, so we'll wait and see what Judith wants to do with the line-up and I look forward to working with her," says Adams.

Adams will not say if she put her hand up for the leader or deputy leader roles at last night's emergency caucus meeting.

"I've just had a lovely family holiday which has convinced me all the more I'm making the right decision," says Tolley.