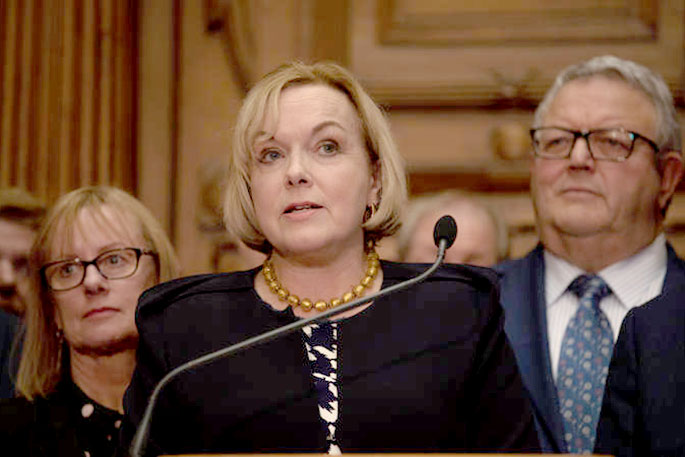 Judith Collins has been elected Leader of the New Zealand National Party.

Gerry Brownlee has been elected as her Deputy.

“I feel privileged to have been chosen to lead the National Party at this important time in our history," says Collins in a statement released following last night's caucus meeting.

“My focus as leader will be helping rebuild our communities and dealing with the economic and jobs crisis by getting Kiwis back to work.

“Only National has the experience and skills to get us through this. We are a strong team and I look forwarding to forming the next Government.”

Collins and Brownlee have been elected following the shock resignation of Todd Muller.

Early yesterday morning, Muller, who is the MP for the Bay of Plenty, announced he was resigning as the leader of the Opposition effective immediately.

"It is more important than ever that the New Zealand National Party has a leader who is comfortable in the role."

Todd says the role has taken a heavy toll on him personally, and on his family.

"This has become untenable from a health perspective."

Collins, 61, was first elected as an MP for Clevedon in 2002 and has been part of six Parliaments.

"I think it's really important that we all have a common goal ... to get rid of the current government and put in place a better government," she said after emerging from the caucus meeting last night.

"One of the things that unifies any party is if they see that we're getting the results that we want ... I think you're going to find that we're very focused on winning.

"There is no chance at all that I am going to allow ... Ardern to get away with any nonsense to do with our economy. I am going to hold her to account.

"I would say experience, toughness, the ability to make decisions ... that would be myself. Jacinda Ardern is someone we should not ever underestimate."

"We're actually better. If you look at our team, our experience ... it's all better than Jacinda Ardern and her team."

She says the party's policies would not see any major changes.

I’d hate to think how bad this place would be if PC gains were repealed. Even with PC advancements in recent years NZ still punches well above it’s weight on domestic abuse, child abuse, gangs, road toll, workplace accidents, massacres. Some people have yet to be dragged into this Millenia so I’m not sure we need to go back. Not sure what nationalistic pride has to do with it because that sort of talk seems to lead to bad outcomes.

I’m sitting here very upset and hurt by your comment . . . Oh. No. Wait, I’m not. Well said. You got it spot on right. This PC crap is out of control.

"old ideas and thinking" are what we need to go back to, this country has turned into a PC cry baby, woke culture dump, time to get some Nationalistic pride back into our country.

National have never been in such disarray and their answer is to provide a leader that their own people formed an ABC club against. (Anyone But Collins). OK, let’s see how she goes... it is a big ask and she must get some credit for accepting it, but her acid rhetoric is not going to be a match for Jacinda’s charisma, in my opinion. I back Labour for this election, but it might be closer than we can see at the moment...

We should remember a few things about the last National Government. They are not, never have been, nor will ever be the party for the average worker in NZ. The surplus they had last time was at the expense of essential spending in Education and Health and we gave the man behind this a knighthood,

Is this a leader?

From an article elsewhere today: ’New National Party leader Judith Collins says the party can “crush” the Government in September’. Good luck NZ, her and Brownlee’s reputation and history does not augur well for many, let alone Labour.

Same old we are the only ones.Your track record on Health,Education,Housing (No Crisis) Selling of State Houses Etc Etc left a lot to be desired.Nothing here sets me alight for a new and vibrant National Party.

Would’ve loved to have seen Gerry Brownlee run for leadership but hey, happy he’s at 2ic. Got a LOT of work to do to get back in running and build that necessary rapport with NZ. Lot of damage been done over the last few years. Focus, focus, focus.

Back to the future

so much for fresh start. More of the same for National, same old ideas and thinking.