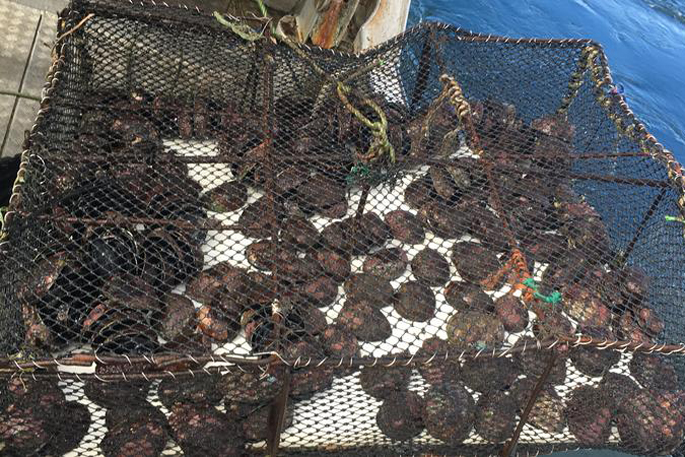 A prominent Chatham Islands fisherman has been sentenced to home detention and community service for failing to declare over 11 tonnes of shellfish.

The scale of under-reporting was described by the Judge as "unprecedented", and the Ministry for Primary Industries say they have been unable to find any case where the quantity even comes close.

Kevan Huia Clarke, a former chair of the Chatham Islands Fishery Association, had accumulated the catch over a fifteen month period between 2017 and 2018.

The total catch was then shipped on in fifty separate transactions, with Clarke working with a separate person in flying it over to mainland New Zealand to be sold.

At the sentencing at Wellington District Court, Judge Jan Kelly said the way the operation was handled with intent to underreport and conceal the total catch was pre-meditated and extensive.

The unreported catch had a value of more than $800,000. It was estimated the total amount Clarke benefitted from the underreporting of fish was $340,000.

His two fishing vessels, holding pots, and quota shares, with a combined value of $115,700, have been forfeited.

"I've been in fisheries enforcement for over twenty years, and I've never experienced anything of that scale before," says MPI's Director of Compliance, Gary Orr.

MPI had come across the under-reporting during routine patrols around New Zealand.

"We were undertaking a patrol, supported by the Royal New Zealand Navy," says Gary.

"We went out to the Chatham Islands, [and] fishery offices embarked on a naval vessel. They lifted a holding pot off Port Hutt, and found half a tonne of Paua in that pot.

"There should be paper or catch records for that, but there wasn't.

"It was like picking on a loose thread, and the more we pulled the more we uncovered. Subsequently that half a tonne turned into 11 tonnes of unreported fish, which is huge by anyone's standards."

Gary says the sentencing would act as a strong deterrent to others, as a "strong message that those who steal from our fisheries will be held to account."

Clarke's offending is part of a wider investigation into a significant illegal fishing operation, known as Investigation Hutt.

"Frustration" from the community

Kevan Clarke is an established member of the Chatham Islands fishing community.

Three decades ago, he was made Chair of the Islands' Fishery Association, a position he held for ten years.

Clarke's lawyer Alwyn O'Connor, before he was sentenced, said it was a very sad story, and that he appeared before the judge "ashamed, embarassed but very remorseful."

He said he wanted to offer the Chatham Islands community his sincerest apologies.

In submissions to the Court, a number of industry associations and Ngati Mutunga o Wharekauri Iwi Trust had outlined their disappointment with Clarke's actions, especially after such efforts had been made by the community to reduce their quota to restore the catchment.

"It's really going to be disappointing for the Chatham Islanders themselves, they take a lot of pride in how they manage the fishery out there," says Gary.

"They contribute to that management by voluntarily not catching their allowable catch, to ensure sustainability. This will really hurt them."

... to see they took his boats. That’s the very least they could do. I’m also not impressed with a display of regret and remorse AFTER he was caught in a cynically pre-meditated scheme that was robbing his own community, on a huge scale. He got off lightly; a while back they would have strung him up, or at least tarred and feathered him. BTW, I’d be very pleased to help them "dispose" of some of the confiscated catch... :-)

So he gets to stay home in comfort and continue feasting on kai moana. Let’s hope his loss and shame is enough to bring about a positive change in his absolute greed.