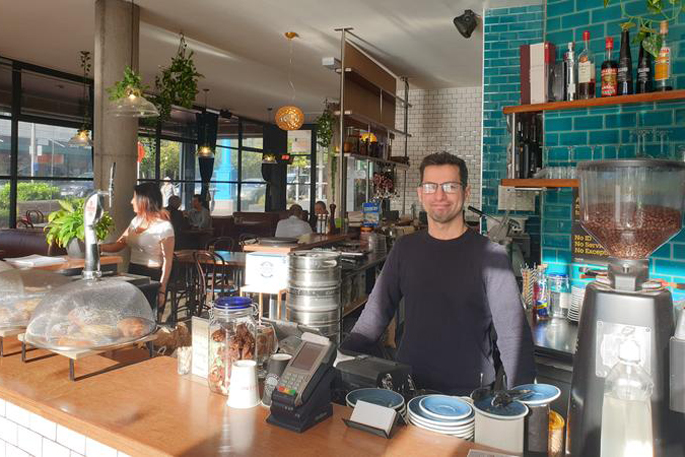 Eat cafe owner John David is looking to close down his restaurant, Cin Cin, now that he has been presented with a weekly rent rise of $400. File photo Photo: Harry Lock/RNZ.

Small business owners are feeling abandoned by the government, over what they call failures to implement proper, effective measures to control rent and lease arrangements.

In early June, the government promised a fund of $40 million which small businesses could apply to, to settle disputes between landlords and tenants over commercial leases.

At the time it was announced, business tenants said it had been a "long time coming", but they believed it would allow many to be able to progress discussions with their landlord.

However, not a single dollar of that fund has been spent, with no business a beneficiary of it. The Ministry of Justice's policy general manager, civil and constitutional, Caroline Greaney, says "The Bill has not yet been enacted and as such final decisions about the eligibility for an arbitration subsidy have not yet been made."

Justice Minister Andrew Little says he understood small business owners' disappointment in the government, and says he shares the frustration over the delays to being able to start distributing the allocated funds.

Rent rise 'the straw which broke the camel's back'

On Friday 19 June, restaurateur John David was notified his rent would be increased by $400 per week on 1 October, by the property manager of his restaurant, Cin Cin.

The email, which has been seen by RNZ, outlined the deal on offer: 25 per cent off for June, back up to the full amount for July and August, before a 10 per cent increase in October.

"[The property manager] says "it's a package, with no prejudice, this is [the] package we need to work on'," says John.

In a statement to RNZ, the property manager, Sean Mulholland, says the rent rise dated back to a property review in April last year, although John  says that review didn't actually take place until November, by which point a three-year extension on the lease had already been signed.

He says Sean shouldn't have increased the rent after that lease was already signed.

He is now looking to close the restaurant down.

"I said six weeks, but it might be less than that, given the circumstances.

He described the rent increase as the "straw which broke the camel's back" for the restaurant.

With John now facing the rent rise on 1 October, he says he hoped the landlord could have been more understanding in the face of the pandemic.

But he felt let down that the government had not done more to help him out, and establish rules around rent increases.

In April, the government said they were considering rent concessions, but ruled out a subsidy or a freeze.

Ninety-eight percent of her business is made by selling international travel packages. She says she's been left with nothing following the pandemic, and with no idea when things might resume.

She needs to sell $90,000 worth of travel to customers every month, just to be able to pay rent. In the current situation, with no international market, and only selling to New Zealanders travelling domestically, she says it's impossible.

As such, she has been trying to find a replacement to take over her lease. She found a willing person, but it was turned down by the landlord, as it was a food business.

"He could rent my building in two weeks' time, and I get none of that back.

Carol says there's a helplessness to her situation, and she didn't "know what the government has done for small business.

"All it's [the government] done for me is cause me pain, grief and expense.

"There was nothing done arbitration-wise for commercial landlords. We have personal guarantees because we backed ourselves, and we backed our business. If I walked away from my business, my landlord can come at me and come at me for my house.

"There is no balance of power between a tenant and a commercial landlord, and that's just not good enough." 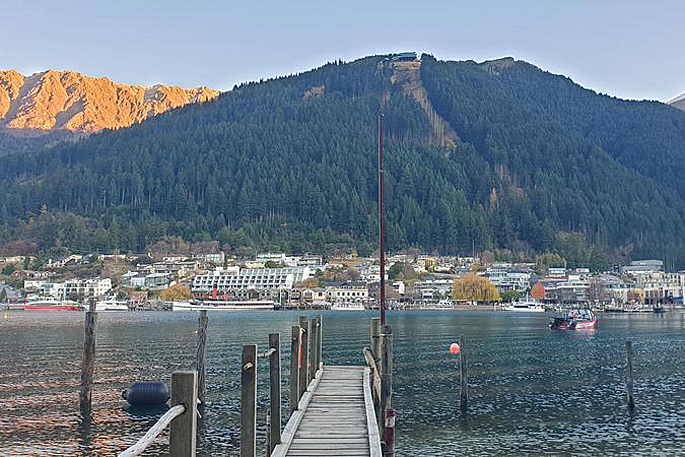 Small businesses in the likes of Queenstown can hardly pay rents, let alone cope with any increases, the Chamber of Commerce says. Photo: Tess Brunton/RNZ.

The Ministry of Justice's Caroline Greaney says that changes had been made "to give commercial tenants more time to catch up on overdue rent obligations before landlords can take enforcement action".

In May, it was also announced businesses would be able to take out 12-month interest-free loans, up to $100,000.

But both John and Carol say a loan wasn't an option for them, as it would just be pushing their financial worries further down the line.

Julie White, the head of Hospitality New Zealand, says other businesses are now beginning to face trouble from their landlords, including those in resort towns such as Queenstown.

Chair of the town's Chamber of Commerce Craig Douglas says some businesses can barely afford to pay full rent, let alone having to deal with an increase.

"Yes, landlords need to make a return on their business as well, but there's only so much money to go around.

"Each landlord and tenant relationship is going to have to work out something that is sustainable for both of them to get through."

Little says he understood the disappointment among some over the perceived failure of government to assist with settling disputes.

"People are entitled to look to government, and say, 'We do need some assistance', when you've got some parties who are unwilling to come to terms.

"We haven't been able to provide that assistance so far. I'm confident that with further discussions, we will get somewhere. But this is taking much longer than I would have liked.

"I have a sense of disappointment about that."

He says that there was a burden of responsibility upon landlords to recognise the times.

"With the pandemic and the response, and the pressure on commercial tenants, I would have expected many landlords would come to terms with those commercial tenants to offer a concession and get them a way through a very difficult time."

... hanging on for a Government bail-out that is of no priority for the current government and probably won’t be for any new government. Why aren’t local councils passing by-laws to prevent rents from being more than a reasonable percentage of turnover? (I’d say 15% max, but it needs to be viewed and argued...) You rent a commercial property in the hope of getting a business return; if you fail and can’t pay the rent, it is proper that the lease should be terminated so someone else can have a go. By the same token, if you have an amazing success, you can afford to pay a little more for the rent and everybody wins. Greed needs to be controlled by fair and reasonable arrangements.

It’s about time this was highlighted, so many greedy Landlords around NZ. If they think you’re making more money, they assume they’re entitled to some of your success.

The government wants to spend up to $6000 for arbitration so tenants and landlords can have a big scrap over what’s fair and not fair. Where is the sense in this. They call this a rescue package. Incredulous !!!