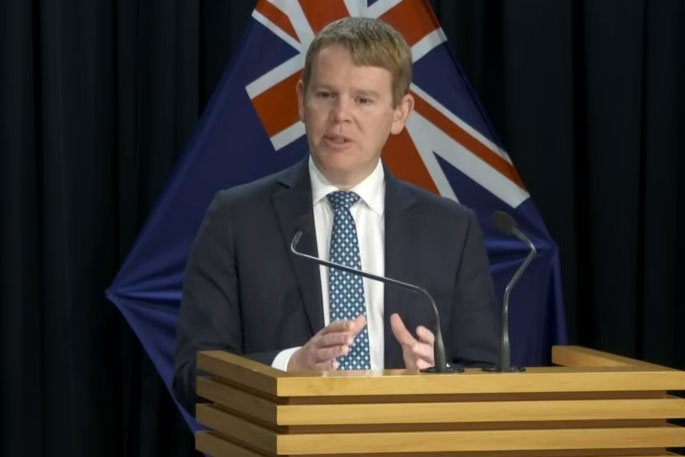 Hipkins was joined by Director-General of Health Ashley Bloomfield, who revealed there were no new cases of Covid-19 in New Zealand today.

Hipkins says he has visited a managed isolation facility, the Grand Mecure, this morning. He says he has not spoken to returnees for obvious reasons.

A 19-page booklet is being provided to those arriving to the facilities, he says. They are also able to access mental health support and primary healthcare.

Staffing levels at facilities would change from day to day, as needs change in facilities, says Hipkins.

"There is a nurse at every facility every day ... staffing levels are managed in each region."

This week 30 New Zealanders will be deported from Australia and will stay in a state-run isolation facility for 14 days upon arrival.

Earlier today, Hipkins told Morning Report the government is against the deportations but Australia is within the law to do it.

"We're receiving them because we're obliged to receive them but it would be wrong to say we're happy about it."

This afternoon, he restated that New Zealand is opposed to how Australia is dealing with deportations.

"Obviously New Zealand is disappointed with the policy overall ... we don't agree with the approach they're taking."

"Australia has given us an assurance that they won't deport further people before working with us."

The government had been looking at how and where to strengthen security arrangements at managed isolation facilities, he says.

The deportees, who would be arriving on a chartered flight paid for by the Australian government, would be staying at an undisclosed, dedicated inner-city hotel with enhanced security attached to it, Hipkins says, with police and military on site.

He says a rigorous psychiatric assessment will be completed before people entered the facilities and in terms of this particular cohort, there has been a very rigorous process adhered to.

Once they finished their isolation period, the deportees will be released into the community.

Hipkins says the Cabinet will be considering the possibility of charging for managed isolation next week.

"With all of these things we have to do the right thing for New Zealand, and what's right within New Zealand law."

The minister urges the general public to use the government's QR scanner app and diary in order to track where they have been in case it is ever needed.

... to have a bunch of dangerous criminals "released into the community". Why can’t they serve the rest of their sentences in a NZ jail?

Perfect time to dump your rubbish. Cannot fault them at all. It’s a bit rich that this insular totalitarian regime is against such a move. If NZ had some Oz rubbish to dump they’d do it in a flash. I wonder how many of the 1m overseas Kiwis will be coming / sent home? It’s going to take a while as we only let one bus in at a time.