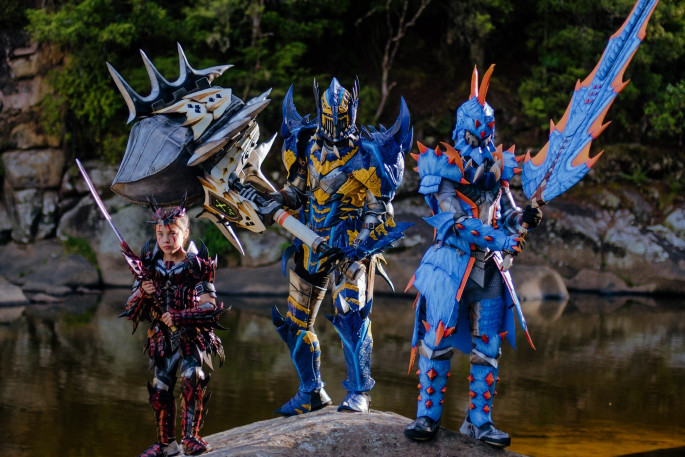 The Sellars as characters from video game, Monster Hunter. From left: Braxton, 8, Dad Steele and Malachi, 16.

Tauranga’s first major event out of lockdown is one for the elves, orcs and Jedi.

After being postponed, Armageddon Tauranga is back on July 25, for a weekend filled with virtual celebrity guest speakers, card tournaments and character creations made by attending cosplayers.

“You talk to lots of people online through cosplay, because we all try to learn off each other to better out craft. Armageddon is a great opportunity to meet them in real life,” says Steele.

Cosplay attracts people from all walks of life. Steele is a father of six who works at the Port of Tauranga.

“No one at work really knew I did cosplay until my supervisor asked to put a photo of my winning costume in the work bulletin – I think they were pretty surprised.”

Steele has been creating cosplays for three years, after an “I could make that” moment with an Iron Man helmet.

His work has gained a reputation – he has travelled to Auckland to teach one-on-one cosplay making lessons and has been commissioned by someone in the US to make Pokemon.

“I don’t usually do commissions, but this guy has been a supporter of my work for a long time. That was what my lockdown looked like: work, hang out with the kids, and make Pokemon in the evenings.”

His favourite people to make cosplays for are his kids.

“Our two oldest kids are our singles and then we have two sets of twins age six and three.

“I made matching Halo cosplays for our first set of twins a few years ago, and now our three-year-olds are big enough to wear them to Tauranga Armageddon.

“The rules say the child entering has to make 50 per cent of the outfit, so I basically just did the dangerous bits.

“Creating something with my kids and spending that time with them is the best part.”

A very important member of the team will be following the very epically dressed troupe of seven at Armageddon: Steele’s wife, Tara.

“It’s really difficult to do anything in those outfits, so while Tara doesn’t dress up, it would be impossible without her,” says Steele.