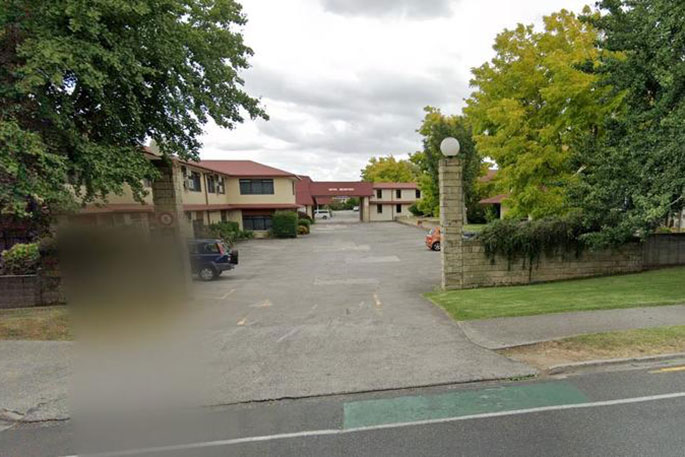 A 50-year-old man has been arrested after he cut through fence ties in the 1.8 metre fence to break out of a managed isolation facility in Hamilton.

Police say it's believed the individual left the Distinction Hotel for about half an hour, between about 6.30pm and 7pm and went to a liquor store on Te Rapa Road.

He is now in police custody and will appear in court later today.

The man arrived from Sydney on July 1. He tested negative on his day-3 test and has now had a second test.

Air Commodore Darryn Webb, head of Managed Isolation and Quarantine, says it's "important to note that the COVID-19 health risk has been assessed as very low".

He says authorities are talking to local businesses that may have come into contact with the individual, and were looking at CCTV footage to confirm his movements.

"We have talked to one liquor store on Te Rapa Road where we believe the individual visited, and it has cleaned its premises as a result of our inquiries.

"Police ensured no one entered the store this morning until health officials confirmed it was safe to do so."

The store owner has been told it is a "low-risk scenario" and it does not need to close.

"As we have said repeatedly - actions such as these are completely unacceptable. Returnees are given clear instructions and information about what their responsibilities are.

"Managed isolation is a critical part in our defence against COVID-19, and it is up to each and every person entering this country to play their part and abide by the law.

He says 27,723 people have gone through managed isolation since March 26 and the "vast majority" of returnees are taking their responsibilities seriously.

"We take any breach of the COVID-19 rules very seriously. Wilfully leaving our facilities will not be tolerated, and the appropriate action will be taken."

I take your point about the risk being low, but I would argue it is low because the controls in place are keeping it low and the 30,000 who have passed through have complied. I understand your comparisons with drink driving statistics but it really isn’t a fair comparison. The two classes are not mutually dependent and we’d like to be doing better with the numbers from both of them. Sadly, fixing one of them won’t improve the other one. Nevertheless, both your posts raise good points.

I agree with you 100%. These people are not in prison and they should definitely have people who can shop for them, just as many of us did. (I thought they DID have people who serviced the quarantine facilities for exactly this. They definitely should have.) As Slim Shady points out, the risk IS low, but it is low because we are keeping it low by strong border protection. 30,000 people have seen the need for the measures and complied; 3 have not. We cannot close the border to people who have a right to be here. We CAN postpone their return so it can be properly managed. But we certainly can’t treat them like criminals...(unless they break the law, as 3 of them have...)

People in isolation are not being punished so what right has the new Minister to say alcohol should be consumed in moderation in these facilities and what is his definition of moderation?That’s not for him to make that decision on behalf of people who have done nothing wrong. I think I would be pretty jolly miffed if I couldn’t get a beer for two weeks. It is wrong of course to break out and put others at risk but ask yourselves why he did it and how it could be avoided by having those in isolation being able to order food and drinks for delivery.

Aside from the very low risk of infection as I keep outlining people may want to consider that there will be many more deaths this year in NZ due to drunk or drugged drivers. And that happens every year. There isn’t much of an outcry or overreaction to that. In fact, many seem keen on legalising drugs without any apparent testing regime. Globally there are 1.5 million road deaths each and every year. Up to a third are due to drugged or drunk drivers. So Covid has a way to go yet.

Out of 30,000 returnees less than 30 are positive, so 1 in a thousand has it. Three have absconded out of 30,000 so 1 idiot per 10,000. Now I know one idiot was positive which means the 1 in 100,000 chance of a positive escapee actually happened we need to settle down a bit. The risk is so low that the authorities didn’t even bother contacting Countdown, and this liquor store has just done a self clean. Stop being so frightened. You have much bigger risk to your health to contend with without worrying about this and overreacting.

Throw the bloody book at him

Enough of these wet bus tickets. Let’s be kind and throw the book at him. He doesn’t deserve to be in our team of 5M. Selfish ba??ard.

As with my comment yesterday - the courts need to be tough on these selfish morons. Send him to prison for 6 months, fine him $4,000 and charge him for his isolation. These people just don’t get it - NZ are allowing them to come home BUT they need to do what the rest of us did, and abide by the rules. It looks to me like Jacinda needs to seriously consider closing the border to all now. Otherwise, we are going to end up in a situation like in Victoria and back in to lock down. It will be ironic if NZ ends up in a worse position than we were before and during lock down simply because selfish morons are being allowed to come home!!

It seems some people think that our boarder is a joke. I would seriously suggest that all people who break isolation or quarantine be cell till court date then celled in concordance with the Judges blessing. it isn’t a joke and it also places everyone country wide in peril. There cannot be any worse thing than to place the safety and well-being of us all in jeopardy.