The business of relaxation in Oropi 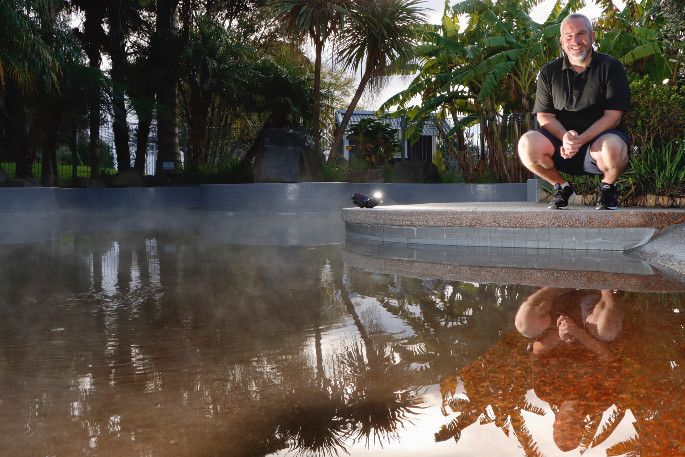 Times are tense but one couple is rolling up their sleeves and turning relaxation into a recipe for success.

Dave and Renee Agnew have literally got themselves into hot water with their first foray into business ownership.

Their purchase of Oropi Hot Pools was on hold over lockdown but the moment doors started opening they were signing on the dotted line.

Dave has high hopes for the future of the business, for the simple reason that many people don’t seem to know about the pools.

“We have people come in here that have lived in Tauranga for 20 years and had never heard about the place.”

Despite that, the business still attracts a steady stream of customers and the winter months pretty much “look after themselves”.

Summer months are a bit hit and miss on some days so the couple plan to turn down the heat as the weather warms up so people can still come and relax.

The pools have been operating since 1998 but the original owners had to deal with the failure of the 450-metre-deep bore and a costly replacement.

The bore taps into hot water which is used to heat fresh, chlorinated water that is safe to bath in and soothes away the aches and pains.

There are no plans to restore the paintball side of the business which stopped in 2014 because Dave and Renee want to just focus on hot water and relaxation.

The beauty spa has been closed for its own makeover and it will focus on massage therapy to  omplement the hot pools.

Down the track, Dave hopes to maximise the geography of the 9ha property and is working through a few ideas. Those ideas are still simmering but he is keen to create something really special for the region, one way or another.

The key is to create new, all-year-round activities and grow the customer base without affecting the relaxed atmosphere.

“We don’t want to flood the pool [with people]. We want people to come here and enjoy themselves.”

Purchasing Oropi Pools was actually quite serendipitous. The original plan was to build a 750-metre flying fox and café in the Papamoa Hills. But they couldn’t secure the land.

“Dusting myself off after that, I looked at this and saw the potential,” Dave says.

And it was probably just as well because the flying fox idea would have had a very strong focus on international visitors, whereas the Oropi Pools are visited almost exclusively by locals.

“I’m a creative person and this is a good foundation. So much land, so much potential.

“The good thing is so few people know about it.”

Renee is happy to let Dave front the business because of his passion for customer service, however, as a commercial analyst her influence will be key to their future success.

The grounds of the property are stunning thanks to the foresight of the original owners who planted lots of trees and created park-like picnic areas.

So, while everybody else will be kicking back and relaxing, Dave and Renee will be rolling their sleeves up and attempting to take the pools to the next level.

Because, while the tranquillity of the place is hard to ignore, the couple do have big ambitions and want to be more than just a cottage industry.