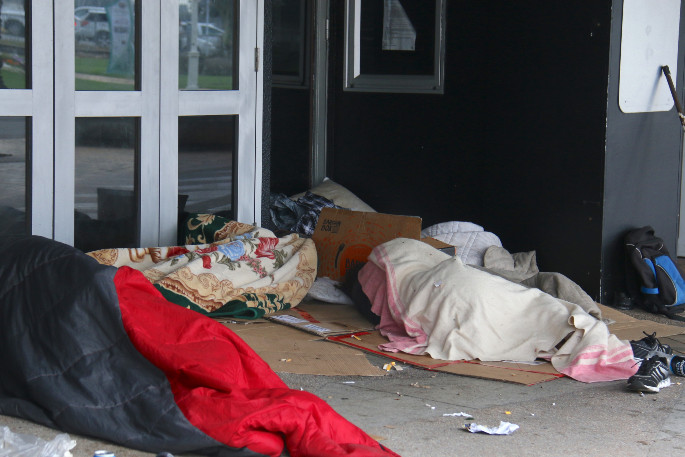 A homeless man says he was given no warning about his possession’s being moved to the CBD Library carpark near a library skip bin.

A homeless man says he is angry after his personal belongings were taken and dumped near a skip bin by council cleaners.

The man, who wishes to remain anonymous, told The Weekend Sun his unattended personal belongings were removed from outside the CBD Library last week on Monday without warning.

He says returning to find his possessions had disappeared caused him the “utmost grief” when eventually he found out they had been moved to the library underground carpark.

Tauranga City Council property service manager JD Thomas says staff asked the individual to move his belonging so that cleaners could access the building and they did not dump the items.

"On Monday when the cleaners were on site the belongings were still there, so they were moved by staff so cleaners could access the site.”

The staff let the individual know where the belongings had been moved to and no items were thrown out, says Thomas.

But the homeless man says his items were moved without warning.

"What I am angry about is that they gave me no warning at all. I could have moved it out of the way.”

Street Kai is a community initiative that feeds Tauranga’s homeless community every Monday night in the CBD.

Founder Tracey Carlton says several rough sleepers in the Street Kai community have had their belongings taken by council staff.

“We are fully aware that the council has dumped our peeps kit in the past. Often they will take it and not let the peeps know where the kit has gone."

Thomas says if rough sleepers’ belongings are in the way, council staff will ask they move them to allow staff to clean council facilities.

"If council staff had to move an individual’s belongings, we would always let them know where we moved them to and would never dispose of them unless they were soiled, abandoned or damaged with no obvious signs of an identifiable owner.

The People’s Project service manager Simone Cuers says they are not aware of this happening in Tauranga.

"People who sleep rough generally have very few possessions but what they do own, they look after.

"The safety and security of these items is an every-day concern, especially if they have stored things like personal items of significance, documents from agencies they are working with and medication."

Simone says it is important to look at the bigger picture, saying the solution to this problem is everyone having a home.

What an awesome idea using the Cargo Shed.

The CBD will never change if our council of clowns does not takes a very hard stand against these rough sleepers. Three so.e words. The Cargo Shed. Perfect to feed them and house them. Done. I agree with morepork 100%.

Looking after their possessions is not leaving them lying around the streets. The mess left by the so- called homeless is appalling. You don’t see our genuine homeless doing this and degrading our city. As for leaving medications lying around . . . The solution is not to house them all, it is merely a good step to find them somewhere to live and cared for but for some of them it is their choice not to. They prefer the streets.

That a person with no investment in their location expects to have the same rights as a property owner or renter who is paying for a roof. Personal property, is, of course, a right for everybody, but to expect to be able to leave it on someone else’s property without paying a storage charge is unrealistic. As for saying the problem is solved if everybody has a "home": sure, just wave the magic wand that successive governments have been unable to wave, and then explain to people who don’t WANT to have a home that they MUST have one because their "stuff " is problematic... Sorry, little sympathy from me here...