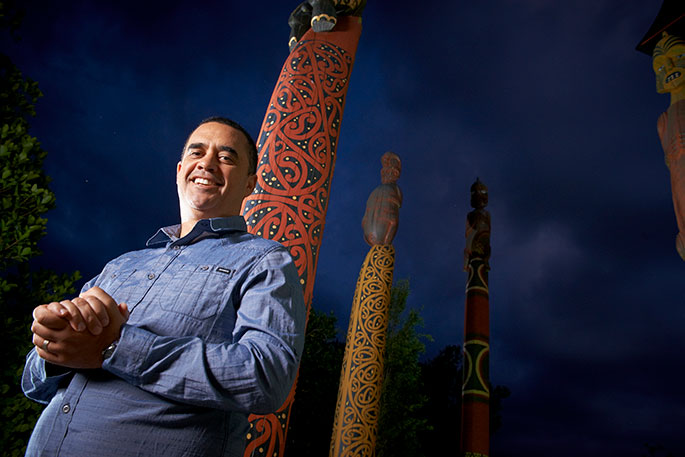 University of Waikato Professor Rangi Matamua (Tūhoe), has been awarded the Prime Minister’s Science Communications Prize from the Royal Society of New Zealand.

The prize, worth $100,000, is awarded to a practicing scientist who can demonstrate an interest, passion and aptitude for science communication and public engagement, or to someone who has developed expertise in public engagement or can communicate complex scientific information.

Rangi says being the recipient of the award is “an absolute privilege”.

“I have been very fortunate with the relationships that I have with particular groups, and the Royal Society is right at the top of that list.”
Rangi is well-known for his work in helping to elevate the understanding of Matariki as an important and significant occasion for New Zealanders.

He says that over the years, Matariki has become a country-wide phenomenon.

“Matariki has become a beacon. It’s a traditional, astronomically-based celebration that has now become part of the wider New Zealand identity. So to be able to be part of that movement really drives me to continue to work in this space.”

Rangi’s journey through the discipline of astronomy has not been a traditional one, but the knowledge base he has developed from a Māori perspective has led to him becoming an expert in the field.

“I am not a scientist from a Western perspective of what science is. But I am a scientific practitioner from a Māori point of view. I believe I practice that every day, and every evening when I am out looking at the night sky.

“I am looking for certain scientific elements, but I’m also looking at deity, genealogy, and traditional cultural narratives that are woven into the tapestry that is the night sky.”

He hopes that one day Matariki, given it is unique to New Zealand, will become the most significant event in Aotearoa above other celebrated holidays.

“I’d like to see it [Matariki] become Aotearoa’s main celebration year after year. I would like to see actioned those principles of reflecting on those that we have lost in the year that’s gone, celebrating who we are, and then planning for the next season and the next year.”

I like his work, it is fascinating how maori learned to to navigate using the stars. However, This is anthropology/history, not science. I don’t think nasa are going to be banging on his door anytime soon . The ’science’ authority who awarded this should be embarrassed for dumbing down the meaning of science!