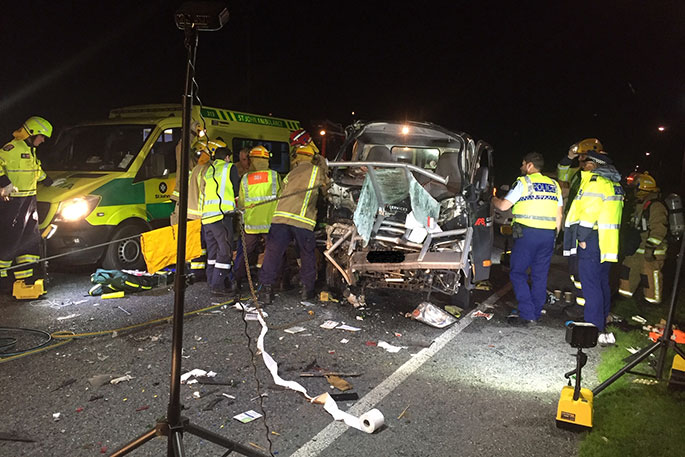 Emergency services at the scene of the crash. Photo: TECT Rescue Helicopter.

UPDATE: The driver of a truck involved in a serious crash on State Highway 29 is in hospital with serious injuries.

Police were called to the scene of the two-vehicle crash near Hinuera just before 5.30pm.

The TECT Rescue Helicopter dispatched to the scene to transport the driver to hospital.

“The driver of the light truck received serious injuries as a result,” says a spokesperson for the rescue helicopter.

“He had to be cut free by the Fire and Emergency New Zealand Team before being stabilised by paramedics before being flown to Waikato Hospital in a serious condition.

“His passenger was taken by road ambulance to Waikato Hospital.

“The people in the other car were uninjured.”

A person has sustained serious injuries following a crash on State Highway 29.

Police were called to the scene of the crash near Hinuera just before 5.30pm.

The road was closed for some time, as the serious crash unit investigated the scene.

According to the NZTA website, the road is now open.