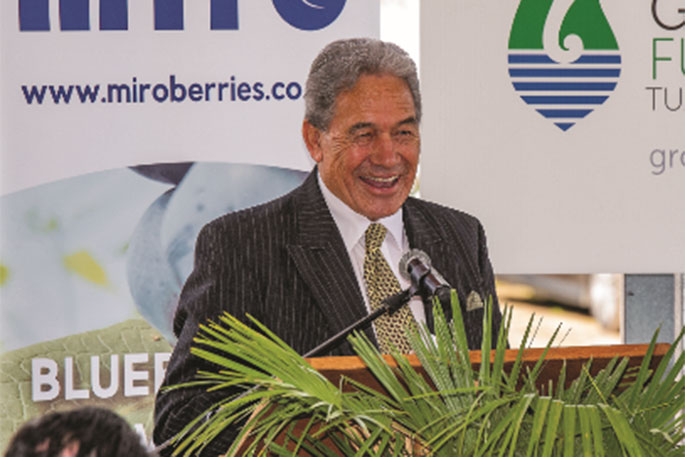 Deputy Prime Minister Winston Peters visited the Miro-Meihana Koata blueberry farm on Friday to announce it would be receiving a $2.1 million boost from the PGF. Photo: TROY BAKER / WHAKATANE BEACON single use only

It's expected the funding will allow the farm to create employment opportunities and support further development and construction.

Peters says the funding will allow the Maori owners to unlock the potential of their whenua and create 157 jobs.

He says banks are unwilling to lend to Maori landowners and this could make it difficult for them to develop and profit from their land.

“It provides opportunities for its staff to be trained in high-tech horticultural practices, while creating value for New Zealand’s primary sector.

“This will provide permanent benefits for families and the community and is the only way forward from this crisis.”

He says the cash boost to the blueberry farm will empower the region.

“This is about being sustainable and leaving something for our mokopuna.”

Miro is a collective of 29 Maori entities including iwi, hapu and whanau who are working to transform Maori land and people through high-value horticulture.

The trust owns 48 hectares from the Omataroa Ranges through to the Rangitaiki River.