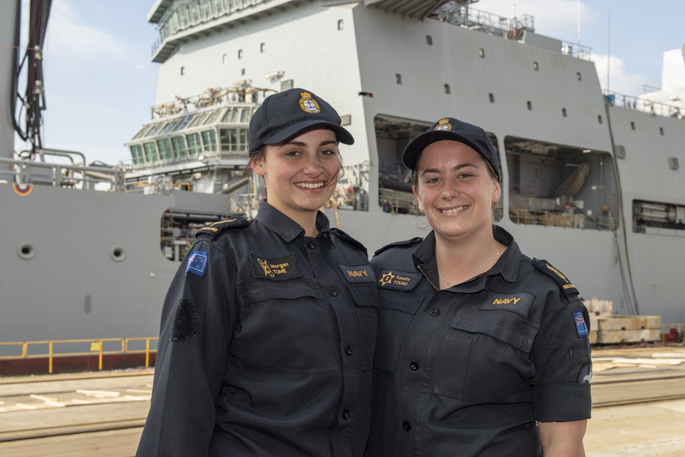 Morgan Tume and Kendra Young met in Year 9 at Tauranga Girls’ College, but it wasn’t until they were in Year 13 that they, along with two other girls in the same phys-ed class, discovered they each had a dream of joining the Royal New Zealand Navy.

All four women are now in the RNZN and Able Communications Warfare Specialist Tume and Leading Logistic Supply Specialist Young have the honour of being posted to the RNZN's newest and biggest-ever ship.

The pair will be part of the inaugural crew of Aotearoa, a 173-metre sustainment vessel with “state-of-the-art design” and capability.

Construction began on Aotearoa in South Korea in 2018. She completed her sea trials off South Korea recently and arrived in New Zealand last week, after a 16-day journey.

She will be formally commissioned at the Devonport Naval Base in late July and Able Communications Warfare Specialist Tume and Leading Logistic Supply Specialist Young can’t wait to get on board.

“I'm very excited to be a part of the first crew to serve on Aotearoa,” Able Communications Warfare Specialist Tume says.

“I can't wait to see what its capabilities are and am hoping we get to berth in Antarctica one day.”

She joined the RNZN at the end of Year 13 because of the variety of work involved and the opportunities to travel and meet people from a wide variety of backgrounds in New Zealand.

“It was the only thing I could see myself doing,” she says.

She has already had some memorable overseas deployments, including two notable trips with Leading Logistic Supply Specialist Young – six months visiting 10 countries around Asia in 2017, which included escorting the United States supercarrier USS Nimitz, and being part of the crew that took HMNZS Te Kaha to Canada in 2018 for its frigate systems upgrade.

“Since I've been out of training I have been to 13 countries with the Navy, which has definitely been a highlight,” she says.

Leading Logistic Supply Specialist Young’s keenness to join the RNZN stemmed from a three-day Defence Careers Experience she attended while in Year 13.

“After that I definitely wanted to do something that was challenging, physical and rewarding – and that’s exactly what the Navy has given me,” she says.

Since she joined, in addition to the Asia and Canada trips she has also been on operations and exercises off the coast of Australia and around the Pacific Islands.

“I love ship life and making new friendships built on joint experiences,” she says. “Being part of the commissioning crew of Aotearoa will be really challenging but a great career development opportunity.”

For the Commanding Officer of Aotearoa, Captain Simon Rooke, it’s all hands on deck as the ship gets nearer to being commissioned.

“I’m delighted with the calibre of officers and sailors we have and I know how proud they all are to be posted to Aotearoa,” Captain Rooke said. “There’s something very special about being a crew member of not only a brand new Navy ship but the biggest one we’ve ever had in our fleet.”

The ship’s enhanced “winterisation” capabilities, such as ice-strengthening, will allow it to undertake operations in Antarctica, including resupplying McMurdo Station and Scott Base.