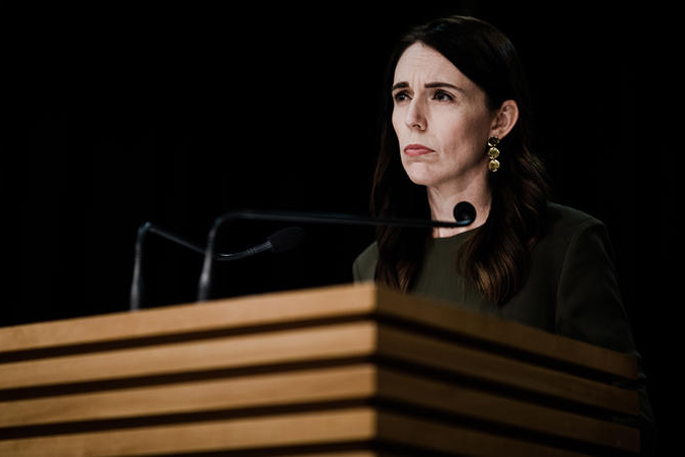 Amid the results of the COVID-19 managed isolation review, Prime Minister Jacinda Ardern wants people to remember that testing has shown no evidence of the coronavirus in the community.

The review found the managed isolation and quarantine system to be under "extreme stress" and unable to respond to the increasing demands being placed on it as more New Zealanders returned home.

Ardern told RNZ’s Morning Report today there had been 80,000 tests for COVID-19 in the past 13 days with no positive results in the community.

"Here we are at the bottom of the world as this pandemic is surging -10 million cases ... the reason we are seeing these extra cases at our border is because the pandemic is growing not slowing, and New Zealand has been on a different trajectory to the rest of the world.

"What you are asking is, is it possible to keep it that way? That is what we are putting all of our effort into... it is a very difficult task though."

She says New Zealanders should have confidence in the government's response because it had "adjusted our settings every step of the way based on what we've learnt, based on what we know is working and based on what needs to be done. So while there is no playbook, we have been very agile."

It was put to Ardern that a clear finding of the report was that ministers had been making policy decisions that weren't able to be carried out on the ground.

"I know the bit of the report you are referring to but actually, the issue that you have raised around we set a clear direction, so did the Director-General of Health. We all did and then whether or not it was happening on the ground was more an issue of ... the fact that we have MBIE, we have health, we have police, we have Avsec, we have the defence force all working on quarantine ... there have been so many different elements.

"The reason we have had as you describe it as struggling is we have a 73 per cent increase of New Zealanders coming through the border since April into quarantine... New Zealanders are afraid, so they are coming home.

"We do have the ability to manage that, what we need though is a system that gives us a bit more warning than a passenger manifest when the doors of a plane close."

The government is working as rapidly as possible to fix managed isolation, but Ardern says the basic elements of the system needed to be dealt with before provisions around compassionate considerations.

The head of managed isolation, Air Commodore Darryn Webb, told Morning Report: "We are seeing a lot of New Zealanders who are looking back at New Zealand and saying 'we really want to be at home' and of course it is their right to return home so the inflow in terms of numbers coming home is growing significantly.

"Early on we were seeing 20 flights a week with low loadings, maybe 10 per cent of the normal capacity. That's grown now to 30 flights per week with 30 perc ent loading, so it is growing rapidly."

The maximum capacity for managed isolation at the moment was 5764 people. 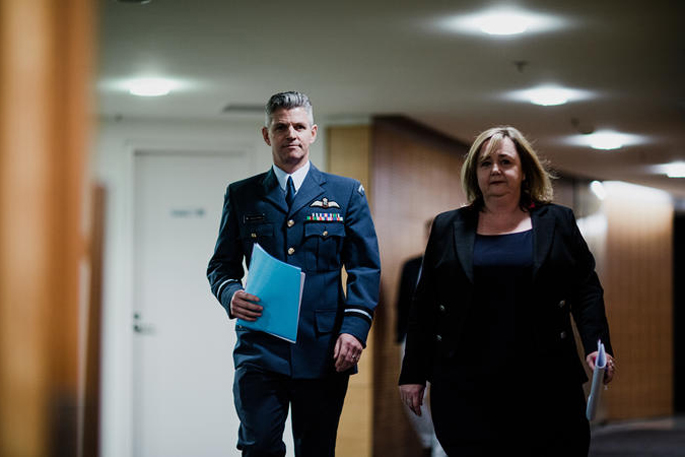 Air Commodore Darryn Webb, along with Housing Minister Megan Woods - who has been appointed the minister-in-charge of quarantine and isolation facilities Photo: RNZ /Dom Thomas.

"We do have an ability to meet a growing need, but there's no doubt from a system perspective, growing supply and demand both work closely together so we will have to think about those supply issues as well."

Webb says policy settings had to be looked at in order to regulate the number of incoming people.

"Kiwis aren't great at advance planning. So while somebody might book a ticket with an intention to travel, it doesn't always translate into boarding the plane. So we get a picture, but often it's not actually until they have checked in and they've actually put themselves on an aeroplane that we have absolute certainty that we're going to see them arrive in New Zealand.

"For a 12-hour flight that's reasonable notice, but for a shorter flight, that doesn't always provide a huge amount of ... lead time. So it's quite a challenge to keep that system working effectively."

He expected the number of people returning to New Zealand to increase.

"That's why we need to advance those policy decisions with some urgency. That is being addressed by government and they will be taking things through Cabinet in the next few weeks."

He didn't see personal protective equipment use as a concern, but had been talking to Director-General of Health Dr Ashley Bloomfield about a "simple and consistent" approach to PPE.

Additional safety measures to implement could include mandatory masks for all new arrivals from aircraft to room and a requirement to stay inside for the first three days of managed isolation.

University of Otago epidemiologist, Professor Michael Baker, told RNZ’s First Up the outcome suggested a wider review of the response to the novel coronavirus is needed.

He is still confident that the managed isolation would be robust if guidelines suggested by the review were implemented.

But he wants a new agency to lead the response.

"I think given the threat from the pandemic and the need for a highly integrated approach, we need a new agency for New Zealand, quite clearly, to manage the pandemic and some of the other threats on the horizon... we look at all the requirements of this pandemic, it has put a huge strain on the public sector. It would be much more efficient to have a new agency dedicated to this task going ahead."

It doesn’t matter whether I think the 3 you quoted are idiots or not; they could all be geniuses. It is their advice that I take issue with. My issue with it is that it is unnecessarily risky, and lowering the border controls won’t necessarily help the economy significantly anyway, just at the moment. There isn’t much point in a strong economy if everybody is too sick to enjoy it. Tight control, at least for now, is the least risk policy, so I support it. I agree it is arguable, but the indications are that it is working and the virus has so far been contained at the border. The local economy is beginning to pick up again and that is encouraging. Tourism is important to us but the current controls can easily be extended to include tourists when that is considered viable.

Here I am watching the 6 o’clock news and apparently the former Chief Scientific Advisor, Sir Peter Gluckman, Helen Clark and the former Air NZ CEO are all calling for relaxing the border restrictions for economic reason and because “waiting for a vaccine is not a realistic option”. I suppose you great minds think these three are all idiots as well?

OK, I take your point about "this level". But we NEED "this level" to be as strong as it CAN be. Anything less would be foolish. I know you don’t agree but that is how many of us see it. So, far it is working. As for being called a "Leftie", that just made me smile...

Where have I said scientific evidence has a consensus against border control? If you learn to read you will see I say “this level” of border control. You are misquoting which, given everything is on record, is stupid. I like the way you dismiss the authorities you disagree with as “idiots” but the ones you agree with are “credible”. Blinkered and uncompromising Leftie.

I managed people for over 30 years. It is never easy to say: "You’re fired" and any good manager sees the need to do this as partly their responsibility, so they are naturally reluctant. Jacinda is doing an amazing job and we are lucky to have her. I can see how she would not enjoy firing anybody, even when, all things considered, perhaps they should have been. You look at possibly putting them somewhere else or retraining them but eventually you HAVE to do it. I had a mentor many years ago who told me to do it at once if it needed doing (and he was right) but I still struggled with it. It is the power-hungry, bellicose, shallow, egomaniacs, who actually ENJOY firing people. (I could mention a certain US TV program with a very well-known protagonist...)

Of course you have opinions, just like the rest of us. But there is no requirement to express them offensively. What other people do in other countries is not a requirement for us to follow. I thought about your point on scientific evidence having a consensus against border control and could find nothing to support it; in fact, quite the contrary. All of the credible authorities have been advocating isolation and lockdown and they are continuing to do so. It is uninformed idiots who worship the dollar (like Trump and Bolisario) who are saying ignore the advice. Like you, I’m not frightened either. I won’t catch Covid-19. But it would be harder not to if people simply flout good advice they have been given. The ONLY way it can get into our islands is across our borders; if we control them, we will all rest easier.

I think I do have a concept of Covid, and Economics, and Liberty, so I have some opinions on the overreaction and authoritarian nature of this regime. From what I have read I think my views are shared across the world by millions. Some of whom are scientists and leaders of greater nations than this. None of whom seem to support this level of border control. I enjoyed your telling off. Typical Leftie approach - you do not agree so arrogantly declare that I have “no concept”. And then finger wagging at someone’s thoughts and humour. The “thought Police”. Lefties love total deference to the regime and do not tolerate any dissent, even if in humour. I shall report immediately to Re-education Camp No.7 for my insubordination towards Commandant Herr Webb.

Glad to hear once again that you’re not frightened but you seem from all your comments to have little to no concept of Covid19. Additionally, your last two sentences are totally unnecessary and your gestapo comment is insulting and in very poor taste. The insult has nothing to do with being or not PC before you jump on that soapbox. It is totally uncalled for. Normally your comments are interesting but this one is a step too far.

I don’t need reassuring. I’m not frightened to death like most Kiwis. You should let people through to self isolate at home and stop this circus with hotels and sending them a bill. Stop acting like some fascist regime. What’s with that bloke Digby parading about in his Gestapo uniform?

verbals from the PM. Nobody is held accountable for cock ups. The words "You’re Fired " do not seem to be part of her vocabulary.