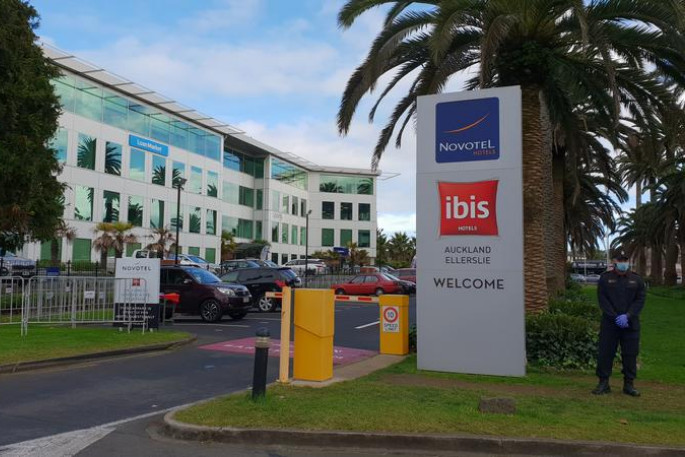 The Navy has been posted outside a Novotel being used as a managed isolation facility in Auckland Photo: RNZ / Chen Liu

New Zealand has picked up four new cases of Covid-19 at the border, with all four in managed isolation. There are now 20 active cases in this country, none of them are in the community.

The total number of confirmed Covid-19 cases in New Zealand is now 1176.

The first new case is a woman in her 30s who arrived in New Zealand from India on June 14. The  Ministry of Health says she is the wife of a previous case who earlier tested positive and had been isolating separately from her husband since his positive test. She tested positive on day 11 of isolation.

The second case is a man in his 30s who arrived from Nepal via Sydney on June 18 on flight NZ102 and had been staying at the Novotel Ellerslie. He tested positive on day three and three close family contacts who have been travelling with him have also been tested, with two negative results and a third pending.

The third new case is a man in his 30s who was in isolation at the Grand Millennium hotel, whose result was picked up in day 3 testing.

The fourth case is a man in his 30s who was isolating at the Haka Hotel in Auckland since June 24 after arriving on AI1316. He was taken by ambulance to Auckland City Hospital last night after showing symptoms and was then tested.

The Ministry said in a statement he was still in hospital in a stable condition on a ward and has not required intensive care.

"Members of staff treating the man were made aware that he had returned from overseas to a managed quarantine facility and appropriate protocols were followed, including the use of PPE. No members of staff are considered close contacts."

There were two new cases yesterday, including one woman who had also visited Auckland Hospital for a short time.

The last time there were no new cases was on June 19, and there have been 15 new cases since then. They are all in isolation and there are no cases in the community.

There was no media conference from the Ministry of Health today.

In a statement, Director-General of Health Dr Ashley Bloomfield said the new cases showed again how important it was to spend 14 days in managed isolation or quarantine together with daily symptom checks.

"Even with all arrivals being tested twice during their stay in managed isolation, we also continue to do a daily check for symptoms consistent with COVID-19 as part of our broader programme, which includes strict protocols in our managed isolation and quarantine facilities.

"While today's news that one of our recent cases is in hospital may be concerning to some, it is something the health system in New Zealand has remained prepared for.

"I want to reassure the wider community that this person is receiving good treatment from the team at Auckland City Hospital who have previous experience of managing positive cases."

The Ministry said 5321 tests were carried out yesterday and there have now been a total of 392,756 tests.