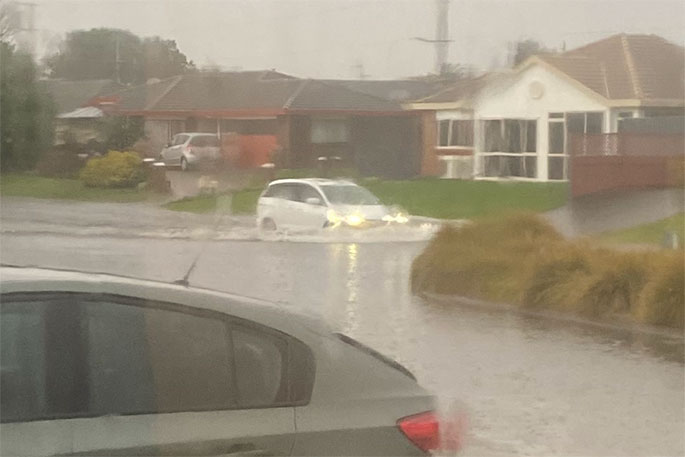 Heavy rain is being forecast for eastern and northern parts of the North Island, with a severe weather watch is force for the Coromandel and Bay of Plenty areas.

A broad low lies slow moving over the Tasman Sea west of Cape Reinga directing an unsettled east to northeast flow across the North Island, says the MetService.

"An associated front is expected to move south across the upper North Island today and Saturday, bringing a burst of heavy rain to northern and eastern parts of the Island."

Major flooding is being reported in Mount Maunganui today, with thigh-high water on Carysfort Road and heavy flooding near the Te Maunga Rouabout.

"A heavy rain warning remains in force for Gisborne and the ranges of Hawke's Bay.

"A heavy rain watch remains in force for Northland, and now also includes Coromandel Peninsula and western Bay of Plenty.

"People are advised to keep up to date with the latest forecasts in case any changes are made or further areas are added."

Forecast: A period of heavy rain, and possible thunderstorms.Rainfall amounts may approach short-duration warning criteria,especially in the north and east.

Valid: 8 hours from 1am to 9am Saturday

Valid: 12 hours from 5am to 5pm Saturday

Forecast: Periods of heavy rain, with localised downpours and thunderstorms possible. Rainfall amounts may approach warning criteria during this time.