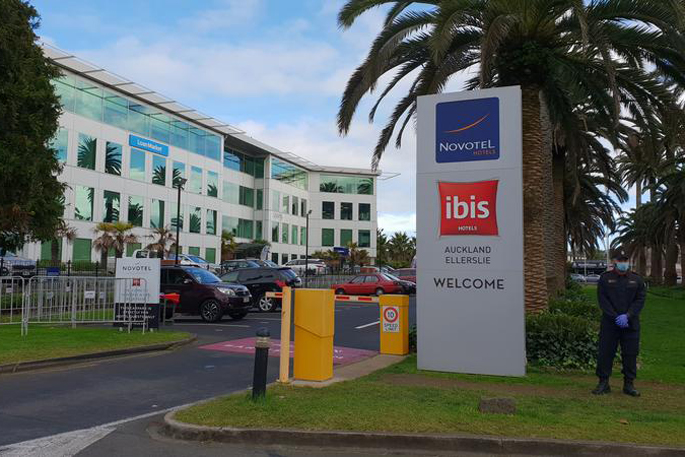 A Novotel hotel being used as a managed isolation facility in Auckland. Photo: RNZ / Chen Liu

People travelling to New Zealand may soon have to help cover the cost of their mandatory two-week stay at a quarantine hotel.

Cabinet will consider a co-payment scheme in a matter of weeks, as the cost of managing people in isolation facilities climbs.

But the government is being warned to think very carefully about such a step.

The border controls are protecting New Zealand from the accelerating Covid-19 pandemic. Prime Minister Jacinda Ardern says  that came at a cost but "the cost of another outbreak is far, far worse."

The cost of isolation and quarantine is $81 million and counting. Nearly $300m has been budgeted for the rest of the year, to help cover the skyrocketing hotel bill.

Cabinet will soon consider whether those wanting to come back here should help pay for their two-week hotel stay in managed isolation, Ardern says.

"What we need to consider as a government is the fairness of a potential co-payment system, so we need to factor in a whole range of issues and keep in mind we cannot stop New Zealanders from coming back to the country where they are a citizen, and so that will have to underpin all of our decisions," Ardern says.

Australia is the only other country to isolate arrivals at hotels and Queensland is the first state to introduce a co-payment scheme.

From next month, all international arrivals there will need to pay up to $200 a day to help cover the cost of their two-week quarantine.

Hayley Jordan, who is hoping to return to New Zealand in August, said she couldn't pay if the government here wanted the same amount.

"I have no idea how I would pay that. If I have to pay that upfront, I can't come home," Jordan says.

She has been stuck in her London flat for 12 weeks and doctors have warned her not to travel yet because she has chronic health problems.

A co-payment scheme would feel like a punishment from the government, Jordan says.

"I'll be coming back without a job, a lot of things have fallen through here, I've lost a lot of money because of the pandemic. So, I'm really not looking forward to that possibly being a reality," she says.

"I would say, potentially, it's in breach of the Bill of Rights Act, because you have a right of entry in terms of your country and to impose a cost on New Zealand citizens who are overseas and wish to come back home... is something which may be considered disproportionate and severe," Michael says.

Health officials are looking at stricter isolation including keeping people in their hotel rooms until they have had a negative result from their first test at three days.

In Hong Kong, people who have recently returned there can isolate for two weeks at home, instead of hotels, but must wear a tracking bracelet so officials can ensure they are not going outside.

Jacinda Ardern says that would not be happening here.

"Our view is you then can't regulate and enforce who then may visit a property, or visit a home. So this is still the best thing we can do to assure ourselves we're keeping New Zealanders safe," Ardern says.

...the general rise in stupid rhetoric here. Yes, returning people should at least contribute to the cost, but when it gets to someone who can’t spell "border" and has no idea what it means, ranting about returnees, and Slim Shoddy trying to convince us we are living in a Police State under a "Chairwoman" whose name he can’t even spell... well, it just gets tiresome. Thanks to Rica who made a good point in a sane post.

the boarder means that no one is to enter, these who break the rules instant jail those who allow people to enter the country and travel get the boot

Some of the rhetoric and actions of this regime have alarming comparisons to a certain despot from 1930s - the rallying cry to “the team”, us against the rest, eliminating the virus amongst us, draconian border controls, sweeping Police powers, propaganda and lies. Trump uses the same rhetoric and tactics. If you look at all despots in history they use these “our team” tactics to rally the small minded. The population seems to be behind our Fuhrer. I fear returnees or anybody “foreign” looking may get targeted.

Easy to said make them pay ... until it’s one of your own

This regime has boxed itself into trouble. The whole “Covid free” game was a ruse. We weren’t and never could be. Makes me think the “fiasco” was actually orchestrated to have the run of no cases so lockdown could be lifted. They have now instructed MoH to stop testing people unless they are high risk. So that is the confirmation it cannot be contained. But the strategy has scared Kiwis to death so it cannot get out of this border closure nonsense. It should allow self quarantine to returnees and stop trying to herd cats in various hotels at great cost. Why should returnees pay for government enforced nonsense? They have thrown money around like confetti to anybody who held their hand out. The government should pay or simply let them through to self isolate. We need to manage risk. It cannot be eliminated. That was a LIE.

It is not a punishment from the government,if it was a increase in airport duty you would have to pay it.At present its a punishment of every taxpayer in the country

A lot of these people who are returning chose to leave NZ for work in a greener pasture. They haven’t paid into the NZ tax system for whatever length of time, so why should the NZ tax payer pay for their isolation. These people are more than welcome to come home.....if they pay!! Otherwise, wait until COVID-19 has gone away.

People choosing to return to NZ should be made to pay ALL the cost!! Why should the tax payer support their 2 week all expenses break in a plush hotel.

I don’t know why returnees cannot self isolate at a private address like in the UK or Hong Kong. I’m sure people can’t make any more of a cluster of it than this regime has. We were doing that and I don’t recall it being a problem or cause for any spread. But Chairwoman Adhern says there are “enforcement” issues. All sounds very totalitarian and authoritarian, more so than Communist Hong Kong! And she recently gave her Police ‘Gestapo’ like powers to make sure people adhered to the manifesto so why not just leave people to be responsible? The vast majority will be much better at it than the regime. Stalin would be proud.