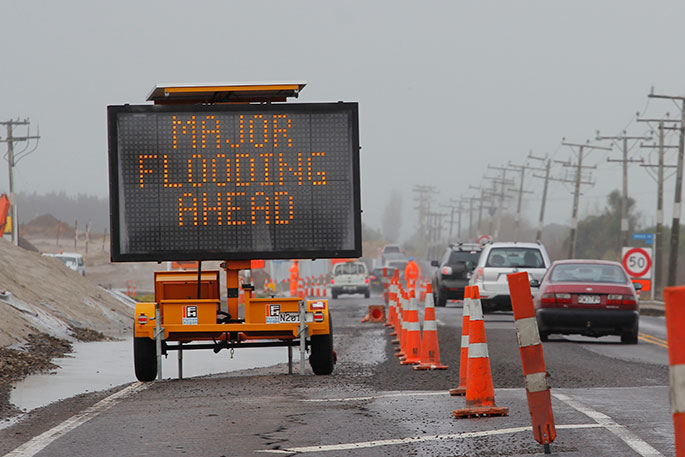 Flooding has forced the closure of a number of roads in the Coromandel area this morning. File photo.

Power outages, surface flooding and downed trees are being reported in the Coromandel and Bay of Plenty this morning.

A thunderstorm watch is in force, along with a heavy rain warning and strong wind watch as a front slowly moves southwards over southern Auckland, Coromandel Peninsula and western Bay of Plenty.

SunLive has received a report of a tree down on State Highway 2, near Katikati.

A caller to the 0800 SUNLIVE news hotline says firefighters are at the scene and are cutting up the tree.

"Traffic control is in place."

Another person has also reported surface flooding on Takitimu Drive as you head along the highway to Mount Maunganui from the Waihi Road overbridge.

In the Coromandel, Powerco is reporting a power outage in the Thames region.

Damaged equipment is being attributed to the cause and Powerco estimates to have the power back on around 11am.

Hikuai Settlement Road, Hikuai - Closed due to flooding. There are no other reports of closed Council roads.

"There is debris and slips on many of our local roads and the State Highway network so if you are driving please take care and add time to your journey," says a statement from the Thames Coromandel District Council.

"About 200mm of rain fell at the Pinnacles, which has impacted the Kauaeranga River and contractors are on site now and will remain until the high tide passes after 10am this morning, the spillway may activate.

"The brunt of the storm was felt on the Eastern Seaboard and our rapid assessment team is out now assessing damage. There are reports of trees down and some wind damage.

"The worst of the storm has passed, but it will take at least the rest of this morning for the roading contractors and our Council staff to clean up and make safe."