Gang arrests: ‘They’re not part of the team of 5m‘ 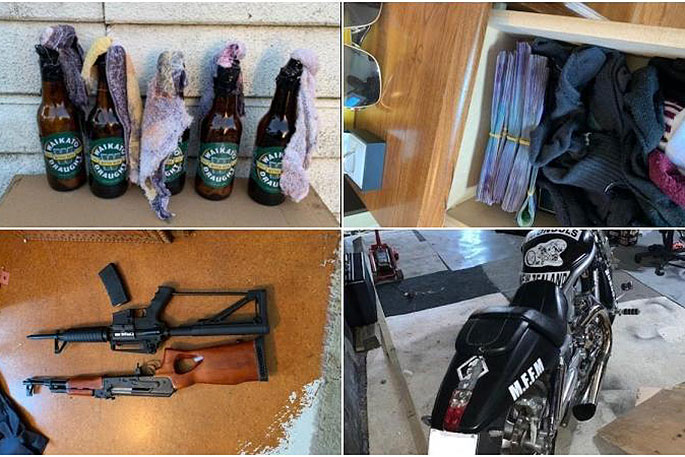 Community leaders in the Bay of Plenty hope police raids targeting the Mongols motorbike gang will reassure the public they are safe after months of escalating tensions.

But they say more must be done to crack down on the root cause of the tensions: methamphetamine.

Since January, there have been six shootings in the Bay of Plenty involving the Mongols and rival gangs.

The Mongols have also been linked to arsons, aggravated robberies, serious assaults and other violent attacks.

"The gang tensions were rising in the western Bay of Plenty.

"The methamphetamine trade, which is fundamentally what this is all based around, and the organised crime syndicates that are managing that trade are very active and they are jostling for position, they're fighting for turf."

Powell was alarmed by the arsenal of weapons seized by the police.

"In all honesty, I can say as a past military officer, I was speechless really to discover the access to those weapons systems, the ammunition that comes with them, and the ability that clearly they have to produce [improved explosive devices] of that level."

Community advocate and lifetime Black Power member Denis O'Reilly says gangs like the Mongols, established here by people deported from Australia, operate on an entirely different basis to the gangs the public is used to seeing.

“It doesn't mean that potentially they're not good people, they're all New Zealanders by dint of having been exported here under 501, but they're not playing the game, they're not part of the team of five million."

Powell says police deserve credit for the Mongol crackdown but he’s still worried about the uptick in violence linked to the 501s from Australia.

"We have not seen this level of activity prior to the 501s arriving. In an environment as small as western Bay of Plenty and the wider Bay of Plenty in some regards, with access to our number one port in New Zealand, I think it's time to have a conversation around how we stem the flow of methamphetamine into the country."

Ngāi Te Rangi chief executive Paora Stanley says research shows methamphetamine use in Tauranga Moana is higher than in other parts of the country.

He says the drug is having a devastating impact on whānau and he's involved in discussions to build a residential treatment centre for meth addicts.

"A lot of our energies, as an iwi, has to go into those types of treatment areas. The enforcement, the arrests and all that type of stuff is conducted by the appropriate authorities.

“The mess that has to be cleaned up. Methamphetamine is phenomenally huge and it's been getting systematically bigger over the last five to seven years."

The 10 people arrested in yesterday's raids face a total of 228 charges.

Detective Superintendent Greg Williams of the National Organised Crime Group told Morning Report: "I suppose the concern for us is some of the people being sent back here are in the top echelon of gangs and in the leadership of gangs in Australia. They still have a strong connection to those Australian gangs.

"You can see from the charges laid here and the types of weapons and the activity over the last few months that they are intent on trying to create a supply line through to communities for drug dealing and the like."

He says the weapons being seized did not surprise police.

"We have seen over the last three or four years a general arming up by the gangs. What's more concerning, as is the case here, the possession of those weapons and the clear propensity to use them ... it's incredible really, that no-one in the community was caught in the crossfire of these ongoing events.

"We have seen an expansion of the gangs - a number of the gangs have increased in size. Part of this is to do with the decrease in the price of methamphetamine and the ability for a lot of gangs to be able to deal it into these vulnerable communities, which is quite tragic.

"As these new gangs come in they are trying to squeeze into what is already a compressed market... What you have seen here is a classic example of gangs warring over that market and when we say that, that's to control these people who daily are having to buy methamphetamine."

The assets being seized by police were being used by gangs as marketing tools to attract new members.

"[These gangs] often sell themselves as cool, lots of bling, lots of flash assets, but really, behind it is quite significant violence and for a lot of these people joining these gangs, addiction as well."

Help the police. Help us identify stupid, stupid fools who feed these murderers by buying their filthy methamphetamine. If you know anyone dealing or using drugs, man up and tell everyone. We need to rid our communities of these terrible people, their dreadful drugs, and those who support them.

They Are Definitely Not

part of our team of 5million. Not while they persist in lives characterised by criminality and violence, However I blame gutless politicians across both main Parties as well as various civic leaders throughout the country for allowing gangs to proliferate. Instead of cosying up to them they should’ve been proscribed from Day 1. I have no problem with groups of mates getting together for mutual support or around a shared interest in cars/motorbikes but we should have Zero tolerance for any group whose common interest is crime and the kind of urban terrorism Tauranga was subjected to not so long ago, It’s time for central government took the lead, including a refusal to accept back anymore 501s. Australia made them, we should refuse to accept them and yes I know that’s stretching it but someone has to,

What we need is a Mayoral Taskforce. Then you can boss the cops about and tell them how to do their job seen as you’re right on top of your job.

Leave Police work to the Police. This guy thinks TCC is insolvent so he should be spending his time learning finance. But I suppose if you are trying to raise your profile for political ambitions in the Beehive then you have to comment don’t you? It’s so obvious that he just views Tauranga as a springboard it’s not funny. I’ll tell you what, I bet the Mongols could get a car park built right and for less money than TCC wastes.

One job done now you can go sort the rest of them out !!! Weazy dogs next

I’m speechless that you didn’t think they could get hold of guns or make ‘improved’ explosive devices. You have to laugh at the other gangs saying these are a bad bunch. Not part of the team - they’ll be gutted with that.