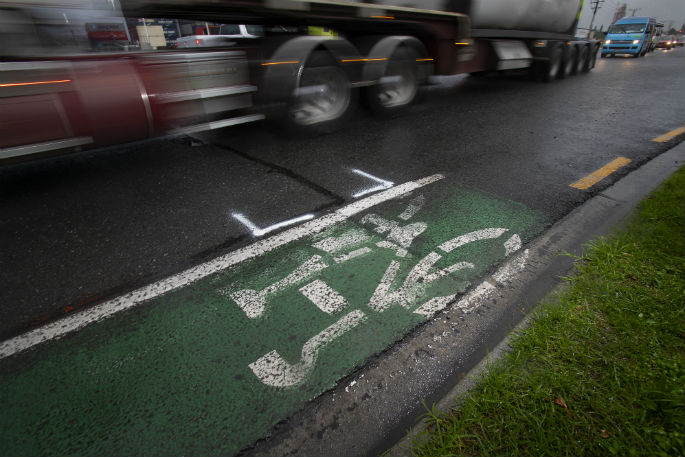 The Totara Street cycle lanes will have their official status revoked.

The Totara Street footpath is now approved for people to cycle on.

People who ride along Totara Street are advised to share the footpath instead of riding on the road.

The Totara Street cycle lanes will have their official status revoked.

Painted bicycle symbols will be removed from the cycle lanes but edge lines and intersection markings will remain for people who choose to ride with general traffic, says a council spokesperson.

"These are temporary changes to provide an immediate, safer option so people can travel by bike along Totara Street without riding alongside general traffic and heavy vehicles.

"The on-road cycle lanes were narrower than the recommended standard."

The changes apply between Hewletts Road and Kawaka Street (just north of Dominion Salt). Tauranga City Council has classified the footpath along that section as a shared path.

The on-road cycle lanes will remain between Kawaka Street and Rata Street.

"Signs will direct people to ride on the footpath. The footpath is 1.5m wide and needs to be shared with care and consideration for other people. Please take extra care at entrances where vehicles enter and exit.

"As a medium-term safety option the council is proposing to build a 3m wide shared path between Hewletts Road and Kawaka Street and provide a separated two-way cycleway between Kawaka Street and Rata Street, linking to Coronation Park."

SO somebody in the Council

WITH A BRAIN !!!!! has finally made the right decision - 40 ton trucks and bikes actually DON’T MIX on industrial area roads !!

At last the council is using common sense and this thinking can be implemented on other areas in Tauranga.

This is going to be interesting to follow going forward, as I can foresee arguments/assaults occurring where vehicles/trucks will be trying to enter/leave properties along this route with cyclists expecting/demanding right of way!!! Have seen and experienced the arrogance of some cyclists along Cameron Road by the racecourse when a vehicle is indicating well ahead of turning into or out of a driveway...

With Riddick that this is a good START. The edge lines should go to widen the road and prevent cyclist from swerving between road and footpath. Roadside cycle lanes are just suicide lanes.

As an everyday cycle commuter along this stretch of road this is a long overdue start. Nobody takes notice of the cycle lane anyway and most mornings I have to jump the curb onto the footpath as the cycle lane is full of cars and trucks especially at the Hewletts Rd end. The 3 metre wide cycle/walkway is needed sooner rather than later so hopefully the council will get this underway immediately.