COVID-19: Thousands of NZers in isolation 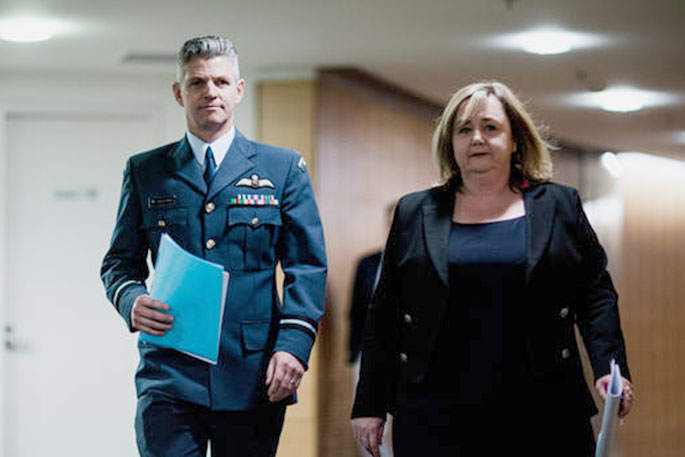 Auckland's COVID-19 isolation facilities have reached capacity, with 4272 New Zealanders in managed isolation and almost 900 more expected to arrive in the country in the next two days.

Air Commodore Digby Webb says the two new facilities in Rotorua are needed to deal with the increase in the number of travellers returning to New Zealand.

The two new managed isolated facilities were opened in Rotorua on Saturday and Webb says returnees got further detailed instructions on Sunday and had the opportunity to ask for welfare support.

The government is looking at other regions to see if there are other facilities to accommodate future arrivals, and Webb says those returning to New Zealand would be required to make personal sacrifices to keep the country safe.

He says the selection of hotels was a detailed process, with 60 looked at in Auckland, of which only a quarter were suitable for further examination.

Minister Megan Woods says the two new cases at the border on Sunday show the testing regime is working as it should.

There had been a huge amount of testing over the past week and absolutely no evidence there was any community transmission, says Woods.

She says she has heard some New Zealanders express discomfort at having isolated travellers staying in their community, but the country has an obligation to provide the facilities.

"There is no legal basis to prevent them from returning home, nor would we."

She says work with the Rotorua hotels has already been done, and they were going to be brought on this week, but this has been brought forward.

She says the last-minute decision to change the isolation facility destination for oversees travellers from Auckland to Rotorua, shows the "system is working".

Residents of the Stamford Plaza Hotel in central Auckland have been worried about a proposal to house travellers there, and Webb says managed isolation at that hotel is on hold until he is satisfied it is safe.

He will not rule out the use of the hotel in the future, but says a review team sent to check facilities at the hotel found two issues not satisfied with the airbridge on levels 3 and 4 of the hotel and a shared fire exit.

He says a semi-permanent barricade system needs to be installed to ensure no mixing of returnees and other guests.

Woods says the government understands people's anxiety about the process.

"We understand hotels are level 4 worlds when it is level 1 outside, all we're asking is a two week sacrifice to ensure New Zealanders are kept safe."

On Friday, Woods vowed there will be "robust systems" in place to ensure the managed isolation and quarantine of returning New Zealanders, and there will be consequences for people who break those rules.

You are right; it is "unworkable". But we need to do better than "live with the virus". Border closures and quarantines CAN work but it needs to be much more effective than at present. It can be controlled through the travel facilitators (airlines and shipping). If they are required to ensure that their conveyances are clear, with all people carried being negative, it is a major step towards keeping the country clear. I’ll be interested to see what solution is arrived at by the new "managers".

I presume our government has the sense to ensure all foreigners are paying their own way when in isolation. We as New Zealanders shouldn’t have to foot the bill for any foreigners- only New Zealanders. Our country cant afford hand outs by our Government to all & any overseas visitors.

"the country has an obligation to provide the facilities". Maybe. But travelers do so of their own free will and maybe should be required to pay for their own isolation costs (or at least pay for some of it). There are hundreds of thousands of Kiwis living overseas. I was one for many years. It is a choice. We could reduce the costs considerably if people were not allowed to board an aircraft without a Covid clearance. (The isolation period could be halved for a start...). It is not going to be viable to handle the entire population returning, if they all decide to do so at once, as Slim Shady has noted. In countries without medical facilities it would be the responsibility of the Airline to provide tests of passengers before allowing embarkation. We need to do much better than we are.

slim shady,its not affordable either at $4000pp at isolation.We have over 4200 people now.How long is it going to go on for.Its got to be users pay ,not by taxpayers.This money is better spent on school lunches.

If the facilities are at capacity, the simple solution is to stop people coming into NZ until there is room for them. Ideally, close the doors to our border to everyone......including Kiwi’s. People had plenty of time to get home before we went into lock down. Presumably too, people in managed isolation have to pay for this, and it’s not the tax payer paying for the fortnight’s holiday in a luxury hotel?

And tell us how many Kiwis are still overseas! When the economic meltdown starts to bite there will be tens of thousands more heading back. What are you going to do? Tent cities? Border closures and quarantines will not work. Get used to living with this virus.