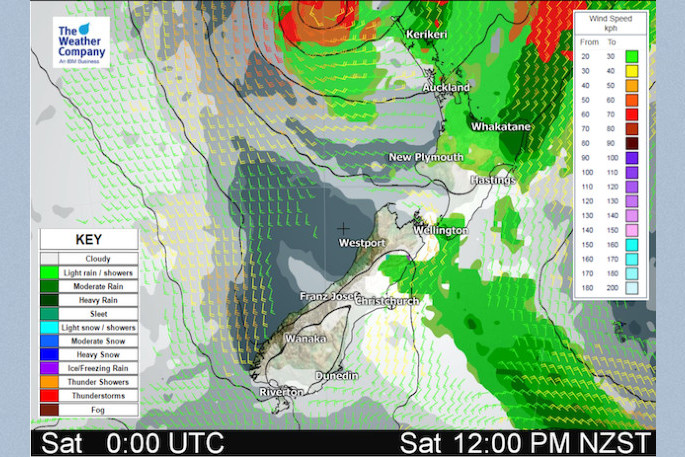 WeatherWatch advises that a ridge lies over the South Island today.

“Meanwhile a southeasterly airflow flows over the North Island feeding into a low centred to the northwest,” says weather analyst Aaron Wilkinson.

In Northland, Auckland, Waikato and the Bay Of Plenty, the weather forecast is for a partly cloudy day with showers for Northland with the risk of a heavy fall in the morning then easing. Elsewhere there is the risk of a shower also, especially during the afternoon and then clearing in the evening. Easterly to southeasterly winds are expected with a high of 14-16 degrees Celsius.

The weather forecast for the rest of the country is as follow:

Wellington
Mostly cloudy, dry to start then a shower or two from midday as Southerlies freshen.
Highs: 12-13

Marlborough & Nelson
Cloudy areas about Marlborough with southeasterly winds. Nelson has a mix of sun and cloud, light southerlies tend to the north in the afternoon.
Highs: 12-16

Canterbury
Mainly sunny about South Canterbury after a frosty start, Mid Canterbury northwards expect cloudy areas (especially nearer the coast) with the risk of a shower at times. Cloud thickens up for most in the evening. Southwesterly winds.
Highs: 7-11

Southland & Otago
Morning cloud (risk of a shower about Southland and the Catlins) then afternoon sunny areas increase, light winds tend to the south or southwest by midday.
Highs: 7-10