Battle of Te Ranga to be commemorated 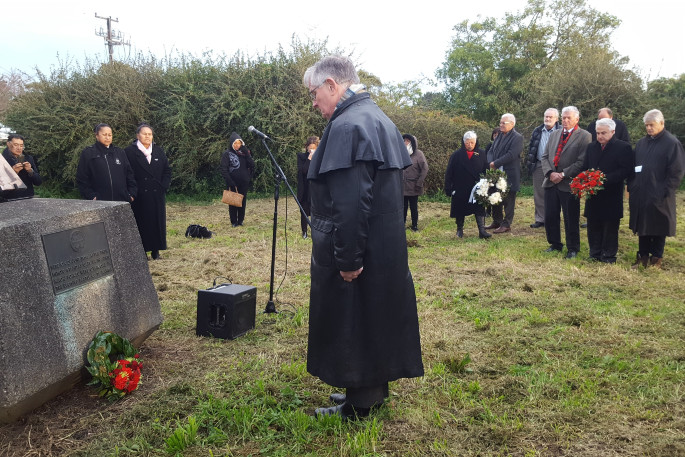 Mayor Garry Webber laying a wreath at the Historic Places Trust marker which was erected at Te Ranga in 1964, 100 years after the Battle of Te Ranga. Photo: Wayne Shadbolt.

On Sunday, June 21, a significant date in Tauranga’s history, a few hundred people are expected to gather at dawn at the Te Ranga battle site which is located in a paddock on Pyes Pa Road near the corner of Joyce Rd.

The Te Ranga battle is significant due to its outcome, in that many see that the loss of lives was significant in terms of the leadership at that time.

“It’s like New Zealand after the first World War, when a whole of generation of future leaders was lost; it was the same for this battle for Tauranga Maori,” says Buddy. “And then not long afterwards followed the confiscation of the land.”

In 1864, following their humiliating defeat at the battle of Gate Pa which shocked New Zealand’s European settler community and its military and political establishment, some of the British force at Tauranga returned to Auckland.

Lieutenant-General Duncan Cameron also returned to Auckland, leaving Lieutenant-Colonel Henry Greer in command of a large British garrison on the Te Papa peninsula. Greer was ordered to attack immediately should Maori forces begin constructing another pa in the district.

Unfortunately for the Maori, British reconnaissance discovered this fortification before it was completed.

Five kilometres inland from Gate Pa, the British force discovered the 500 to 600 Maori working on the defensive earthworks at Te Ranga.

Early that afternoon, following the arrival of reinforcements, Greer ordered men from the 68th and 43rd regiments and 1st Waikato Militia to advance.

The 43rd – ‘mad for revenge’ for their losses at Gate Pa – 68th and 1st Waikato regiments stormed the rifle pits.

The battle that followed has been described as among the bloodiest of the New Zealand campaigns. In desperate hand-to-hand fighting, British troops exacted terrible vengeance for Gate Pa.

The Maori garrison was unable to hold the incomplete defences and slowly withdrew.

When Puhirake, the hero of Gate Pa himself was killed, the retreat became a rout.

British cavalry gave chase, but could not penetrate the nearby bush.

More than 100 Maori, including the chivalrous Henare Taratoa, were killed or mortally wounded at Te Ranga, as were 13 British troops. The visiting iwi suffered heavy casualties, which contributed to their subsequent enthusiasm for the Pai Marire insurgency. The Maori defenders including Puhirake were buried in the trenches at Te Ranga.

The one-sided battle at Te Ranga largely crushed resistance in the vicinity of Tauranga Harbour. Some Ngai Te Rangi and Ngati Ranginui surrendered arms to the British at Camp Te Papa in ceremonies on July 21 and 25. Much of their land was subsequently confiscated.

Peace came to Tauranga although this was far from the ‘surrender’ the British claimed it to be.

Everyone is welcome to attend the public event on Sunday.

Rebellion and killing are not chivalrous

Ngaiterangi from Tauranga had joined in attacks on settlers and troops in south Auckland in 1863, and then joined the kingite rebellion in the Waikato. After defeat there, they were an armed threat to Tauranga; they and their allies can hardly deserve the description of “chivalrous”. As described in Gate pa and Te Ranga, the full story (with John McLean, 2018), Ngaiterangi met the Governor at Tauranga on the 5th and 6th August, 1864 and surrendered. After debating various solutions, all Maori present (both rebels and friendly) determined that they should give up all their lands into the hands of the Governor, who announced that he would return three-fourths of their land, retaining the remainder as a punishment for their rebellion. In the event, much land was returned or purchased, with 17% (less than the 25% initially intended) confiscated.

Always more to the story.

Yep, there is always a lot more to the story isn’t there.

It’s worth noting that Gate Pa was the third pa built progressively closer to Te Papa specifically intended to intimidate and challenge the settlement. The Waitangi Tribunal report WAI 215 provides quite a lot of detail on the subsequent confiscations which included protracted negotiations over several years and debate between tribes and with government over whose land and how much should be confiscated, what should be returned, and to which tribe.

History !!! The world is made with it. Good or bad it’s formed us we need to embrace it to move forward