Giant squid caught in the BOP a rare find 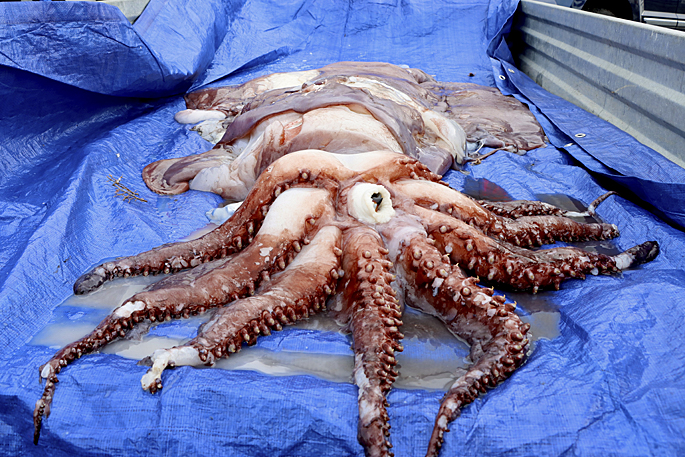 When the crew of the Margaret Philippa hauled in their fishing nets, they weren’t expecting to see a huge jelly mass amongst their catch of orange roughy.

Skipper Roger Rawlison says it wasn’t until it fell out of the net that the crew realised it was a giant squid, around 3m in length and weighing 80kg.

They were fishing around 1000m deep just north of Whakaari/ White Island at the edge of continental shelf and often get squid as a bycatch but never anything of this size.

Roger says in the space of 24 hours he caught a 10kg squid, then a 30kg, then the massive 80kg gravid female.

“Within 24 hours, I'd caught three of my biggest squid I've ever caught.

“I was very surprised, I've never seen one that big.”

Roger says after catching the squid the first thing he thought of was contacting Chris Battershill, a Professor of Marine Science at the University of Waikato in Tauranga.

Chris and the marine science students have taken samples of the flesh to study as well as eggs that will be cryo-preserved then hatched to understand the life cycle better.

The squid will be sent to Auckland so Auckland Museum staff can identify its species.

Chris says it is possibly a new species because it has short tentacles and quite fat fins unlike other giant squid – he hasn’t seen anything like it before. 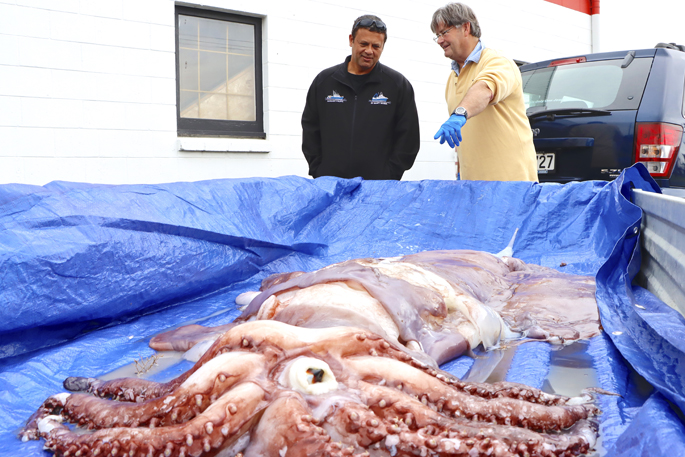 The Tauranga campus is doing a study on the effects of the Whakaari emissions after the eruption and will use the flesh samples to test for toxins.

“There were fish kills after the eruptions and things like that.

“So we wanted to have a look at how far through the food chain everything is going.

“It's tragic what's been happening there, but the island itself is one of the few places in the world where you've got a carbon dioxide seeping out of the marine sea floor but at a shallow depth.

“So it's kind of like a living laboratory for climate change.”

Chris says catching the giant squid shows the vibrancy of the ocean around the Bay of Plenty.

“They're getting orange roughy out there, so you’ve got these sub-Antartic fish and yet in the surface waters you're getting these sub-tropicals like lion fish.

“You're seeing before our very eyes this real climate change thing happening with changing currents.

“So as a marine science centre, we're in exactly the right spot.”

Roger says they have noticed the water is warmer as well with the orange roughy season running late because the water is too warm.

“We only catch orange roughy off White Island mainly in June and July, but it's running really late.

“We'd normally catch all our orange roughy by now, but we haven't even scratched the surface of it.”

Chris says the lifecycle of squid is quite short and the one that was caught would have died after spawning.

... the progeny of the squid will be doing something useful and it will not have died for nothing.