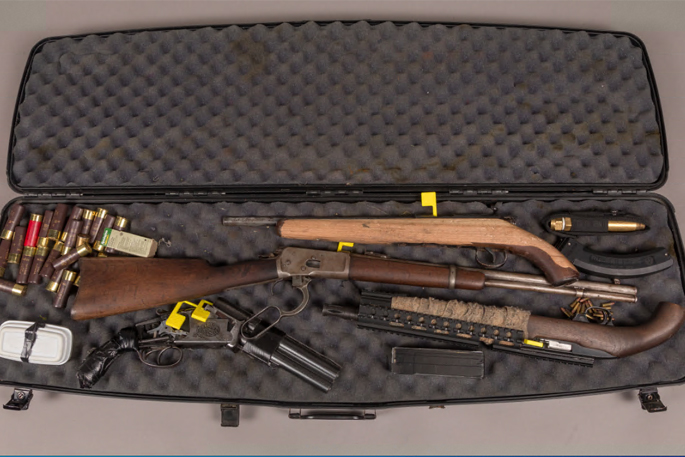 Firearms seized in a long-running operation targeting organised crime by the Central chapter of the Hells Angels Gang. Photo: Supplied.

The Manawatu Police and Police Asset Recovery Unit have terminated a long-running operation targeting organised crime by the Central chapter of the Hells Angels Gang.

Detective Senior Sergeant Simon Harrison says within the past week police have executed a number of search warrants and carried out enquiries at addresses across Palmerston North, rural Manawatu, Whanganui, Auckland and the Bay of Plenty.

As a result of this operation, 16 properties have been searched, two active clan labs have been shut down, and 12 firearms, ammunition and a taser have been recovered.

Four high-end cars, six custom Harley Davidson Motorbikes, a stolen 2.6 tonne excavator valued at $35,000, two stolen trailers one worth $13,000 and a quantity of cash have been seized.

Illegal drugs including, cocaine, ecstasy, methamphetamine and cannabis were located.

“These illegal drugs cause devastating harm in our local communities and the public can be assured that we will continue to arrest those responsible and hold these offenders to account,” says Simon.

“These people have attempted to increase their own personal wealth and social status through the supply of illicit drugs, offending that contributes greatly to the misery and social harm of others.

“Through the dedicated work of investigators police have successfully been able to seize and remove these ill-gotten status symbols of perceived success.”

He says profits are what drives organised crime, therefore police will continue to target this motivation for people to become involved in such crime.

“Information from the community regarding organised crime and gang-related offending is invaluable in helping NZ Police to investigate crime and prevent harm - the more we know, the more effective we can be at stopping criminals unfairly profiting at the expense of others”

Information can be provided to Police via 105 (phone or online reporting), or anonymously via Crimestoppers on 0800 555 111.

Our Police appear to be making great strides in targeting the gangs and hitting them hard. The hard work is really appreciated. We don’t want these morons terrorism in our country. Keep up the awesome work.