LIVE: One new case of COVID-19 at the border 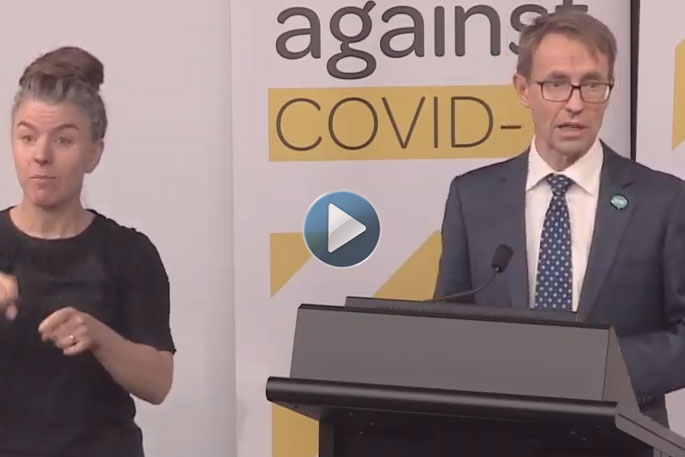 One new case of COVID-19 is being reported today.

Director-General of Health Dr Ashley Bloomfield says the new case is a man in his 60s who is in quarantine in Auckland.

He arrived on a flight from Melbourne on June 13 and has been in isolation ever since.

Ashley says the man flew from Lahore to Doha and then from Doha to Melbourne, before flying to New Zealand on Air NZ Flight 124 on June 13.

Ashley says he showed symptoms on 15 June and was swabbed the next day.

The man is staying at the Jet Park hotel, and was transferred there with his travelling companion after developing symptoms. There are 145 people staying there.

"He wore a mask on all the flights.

The total number of confirmed and probable cases is now 1507, and there are now three active cases.

Ashley says another significant cluster - connected to a Hamilton rest home - has now been closed.

Ahsley also spoke about the two sisters with COVID-19 who were released from isolation to travel from Auckland to Wellington to visit a dying parent earlier this week.

He says one of the two friends who met with the two women had returned a negative test and the other test was pending.

He says all but 97 of the 364 contacts of the two women, who stayed at the Novatel hotel in Ellerslie and were on their flight, had been contacted so far.

"There was a lapse in the process for us introducing the routine day three and day 12 testing in the latter part of last week and I know that the case of these two women will have upset people and shaken people's confidence.

"I've certainly been upset by it and I apologise that we've ended up in this position."

He says people should still trust what he said.

Do not let anyone into NZ who did not have a clear test prior to starting their journey and still isolate completely for two weeks.

...aren’t ALL passengers headed to NZ tested BEFORE they come? It’s like we are closing the door after the horse has bolted.

Anyone planning to travel to NZ should have a recent medical certificate to prove the are safe from NOVID 19. before boarding aircraft.Why should we be their caretaker?