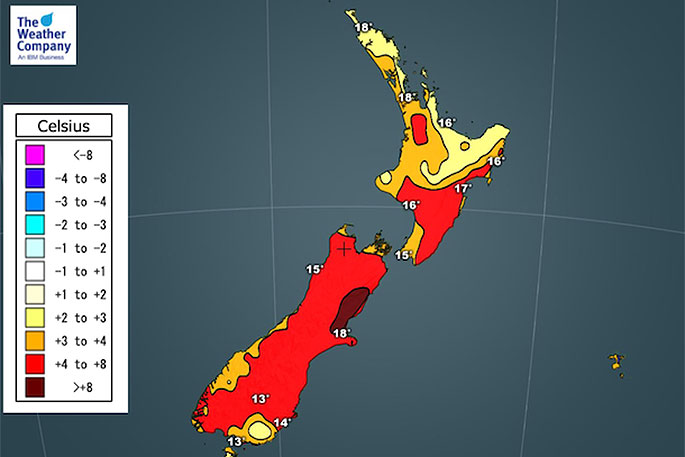 Today's warmer weather is expected to be short-lived as a cold front moves up the country.

WeatherWatch.co.nz says a cold front due to move northwards over the South Island today is a little slower in coming up then it was looking yesterday or the day before, but this brings the benefit of warmer temperatures for a little longer.

But make no mistake it will become colder, says weather analyst Aaron Wilkinson.

"Another warmer day with Canterbury likely to get into the late teens, perhaps even early twenties again. The coolest highs today will be about Southland where a southwest change hits by midday.

"Still warmer than average overnight tonight for the North Island for most regions. 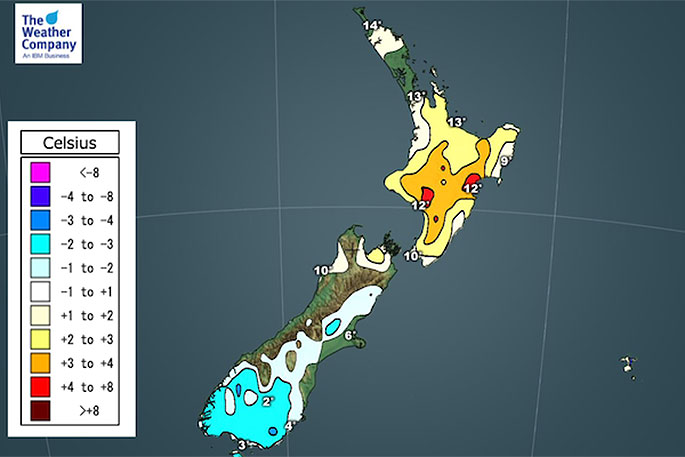 Winter 2020 is proving to be weird, even if you're waiting for the winter solstice to officially say winter is here - the pattern we have right now is unusual due to high pressure, says WeatherWatch.co.nz head forecaster Philip Duncan.

The highs (or anticyclones) crossing the country right now are very powerful, with central air pressure up to the 1040hPa range.

"Put simply, this is as big as most highs get and they are oddly having a positive affect on our climate," says Philip.

"It was spring last year and over our recent summer that highs stretching from Australia put many parts of NZ into drought.

"Even as droughts slowly end with 'death by papercuts' this year (a term WeatherWatch uses to describe months of accumulated showers fixing the problem, rather than one big rain event) we are seeing more high pressure move into NZ."

So why are more powerful highs actually bringing us rain?

"It's all to do with the shape and location of the centre.

"Last spring and summer most highs were parked over Aussie and spread east to protect northern NZ.

"This acted like an invisible brick wall from Aussie to NZ, stopping sub-tropical rain from heading south and limiting how far north any southern rain events went. It lead to drought."

Now in May and June New Zealand has seen these highs more independent - rather than just stretching out from Aussie.

WeatherWatch.co.nz says they are breaking away from Aussie and becoming their own system freely tracking over NZ.

"As a result - we're getting the colder southerly changes as they move in, then the long lingering sub-tropical northerly flows afterwards - and it's this key part that is helping produce rain in the dry zones."

Philip says it's rare that high pressure after high pressure starts to make rain - but it's what we're seeing as these powerful highs have good 'reach' and can pull down moisture-rich air over the country.

In fact, he says this Thursday NZ will be stuck between two highs.

"The eastern high feeding in sub-tropical rain to northern NZ while the western high feeds in a snowy, colder, showery southerly.

"The two air masses meet over New Zealand generating rain - and maybe helping to spin a very weak low too."

And it happens again next week.

Another big high with colder nights, then a sub-tropical flow spreads over New Zealand. And if not sub-tropical, at least milder northerly quarter.

"This set up matches what RuralWeather.co.nz and IBM forecast in our June outlook issued in May - that rainfall would be returning to normal despite the big highs," says Philip.

"Now, we're starting to see how this unusual set up works - with highs dragging in areas of rain and allowing them to soak dry regions.

"Not your normal start to winter - and one that will be a positive for many growers and farmers, not to mention water supply in our largest city, Auckland."