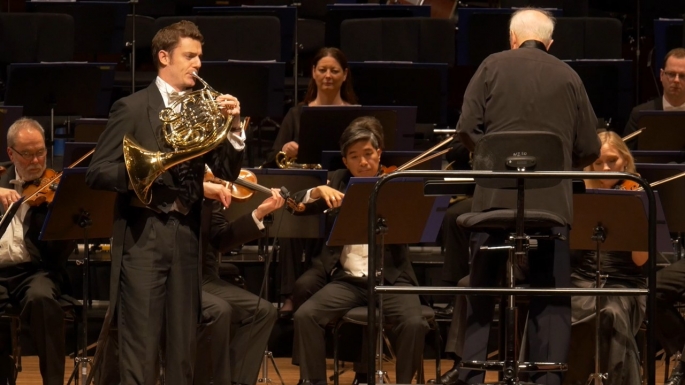 The New Zealand Symphony Orchestra will be streaming a Mozart horn concerto on June 17.

Critics praised the Section Principal’s exquisite interpretation of Mozart’s famous concerto as “Glorious” and “the epitome of breezy bonhomie”.

“The best part about this piece is that it’s the perfect format to display Mozart’s lyrical genius alongside his sense of humour,” says Samuel.

The NZSO is delighted to again showcase Jacobs’ extraordinary ability and supreme musicianship with a free streaming of his 2016 performance.

The streaming will premiere at live.nzso.co.nz  at 7.30pm on June 17 and can be viewed via smart TV, mobile phone, tablet or computer.

Since the COVID-19 restrictions, the NZSO has streamed more than 40 new performances by Orchestra players in their homes, along with some earlier filmed concerts. These have been enjoyed by many people, including viewers experiencing the NZSO for the first time.

Other NZSO streamed concerts and performances are also available to view on demand at live.nzso.co.nz. These include the Johann Sebastian Bach series Sei Solo, Ryman Healthcare Presents Discovering Beethoven, the Shed Series concerts Heritage and Speed, and Play Our Part, featuring NZSO players and international guests performing in their homes.

For families the NZSO has also produced Music Room, a ten-part series of educational videos.