Celtic knots, wharaki and a dragon 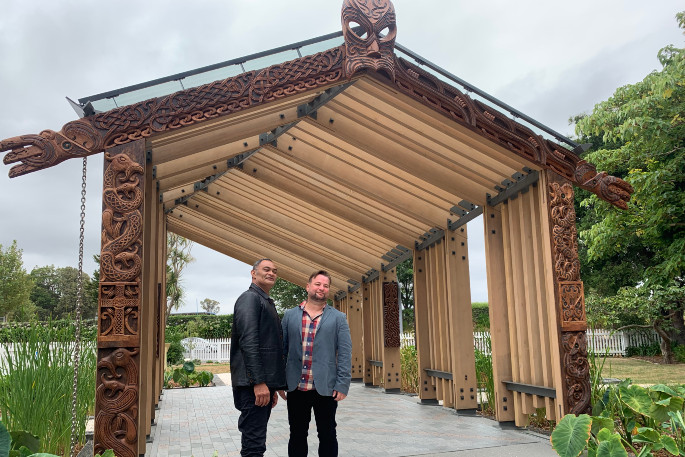 I often find I need help interpreting the meanings behind the motifs, carvings, murals and artistic designs that appear around our city.

Fortunately we are provided with information plinths that have helped turn our landscape into an outdoor museum of sorts. Recently though, I came across a mixture of Celtic knots, traditional Maori wharaki patterns and a dragon.

For those who drive regularly past the corner of The Elms property heading towards Chapel St, an interesting eye-catching structure has appeared.

It was the slanted roofline that first caught my attention. “What is that?” I wondered at what seems an unusual asymmetry. An inventive design, it stands amongst the expansive grounds that are home to a historic Gregorian house, library and buildings from a much earlier era. The property is also the site of what was originally the Otamataha pa, the landing place of ancestral waka, and home to a thriving pre-European Maori community. A truly significant heritage site amongst our growing modern city. 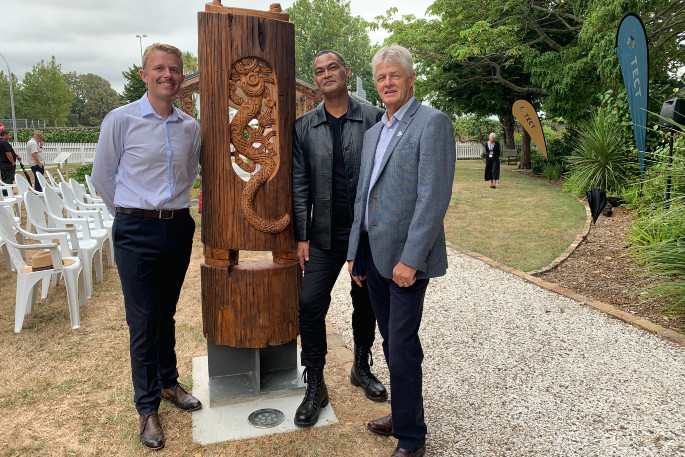 I went along to the unveiling of this new significant TECT Heritage Garden at The Elms | Te Papa Tauranga, and once again found myself learning more about this place I live in and call home.

Justin Matthews from Matthews and Matthews Architects Ltd is the innovative architect behind  the design.

As he explains the integration of two cultures being at the heart of the concept, I find myself wonderfully starting to be able to ‘read’ the structure behind him.

“The form of the building is designed around the coming together of two cultures which is reflected in the transition of the gable form to a skillion roof form, and the idea of transition through history  and time.”

It’s a marvellous experience having your understanding opened to design elements. I awaken too, to the realisation that the plantings in the garden around the pavilion are also significant. There are raised garden beds containing plants of economic, cultural and decorative value, all with botanical and historical interest.

“It was designed not only to resonate with the city’s cultural and environmental heritage but  also to significantly enliven a national treasure,”  says Andrew.

“We are so grateful to TECT; the $250K in  TECT funding turned a long-time dream into  an exciting reality.” 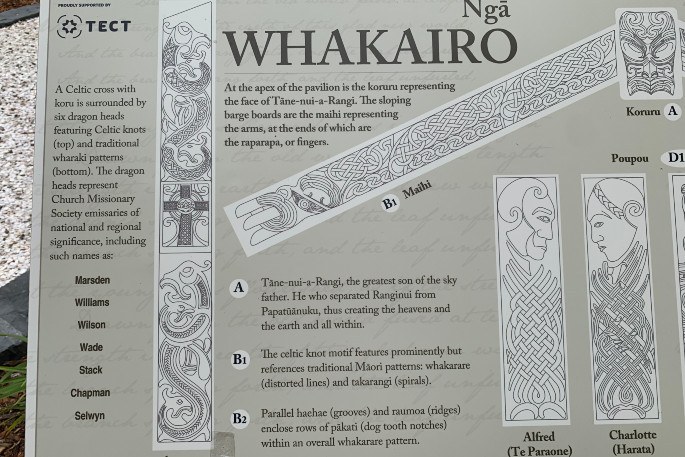 The carvings adorning the structure add greater meaning and value, so I turn to Whare Thompson who is the master carver responsible for them.

“They represent the history of The Elms, both pre-European to the introduction of the missionaries coming and settling at Te Papa here,” says Whare. 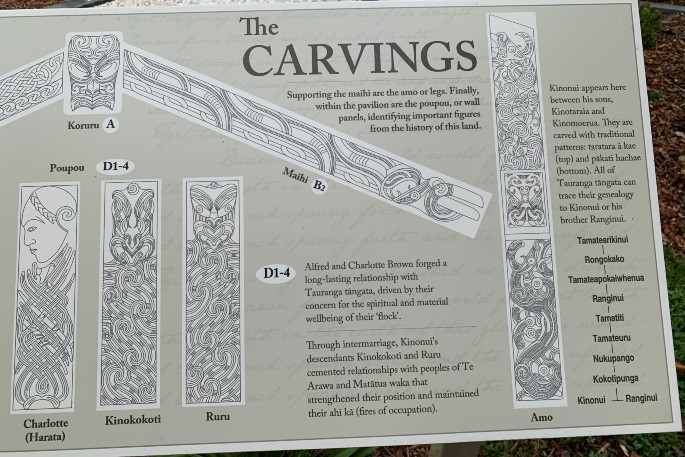 At the apex of the pavilion is the koruru which represents the face of Tane-nui-a-Rangi. The sloping barge boards are the maihi or gables representing  the arms, at the ends of which are the raparapa,  or fingers.

“On one side you’ve got representation of the ancestors from this local area,” says Whare.

Kinonui appears here between his sons, Kinotaraia and Kinomoerua. A nearby plinth tells me that all of Tauranga tangata can trace their genealogy to Kinonui or his brother Ranginui.

“On the other side, we’ve got representation of the missionaries that came and established themselves here at The Elms.”

Whare has carved representations of Alfred and Charlotte Brown, who forged long-lasting relationships with Tauranga tangata, driven by their concern for the spiritual and material wellbeing of their ‘flock’. 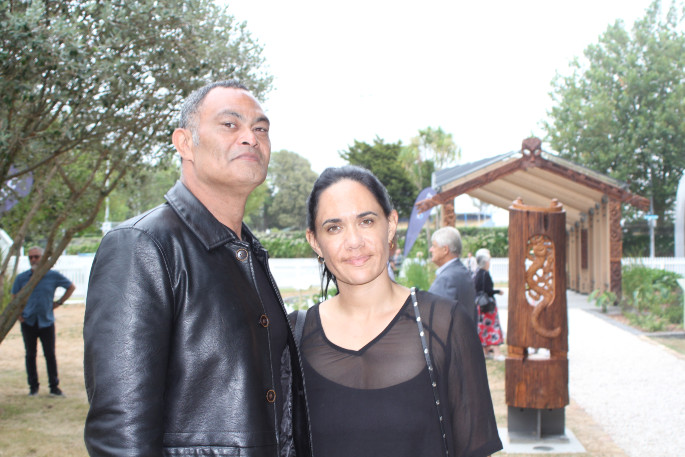 Carver Whare Thompson with his wife in front of the pou

There is a pou nearby, carved by Whare from a concept by Peri Kohu. This reflects the promise that Te Papa held for united divided peoples into a nation under one God. It references Ezekiel’s prophecy that the two Houses of Israel – Judah and Joseph – each symbolised by a stick – would one day be reunited under divine protection.

Samuel Marsden, who is depicted on a plinth on his arriving in NZ in 1814, was the first to suggest that Maori descend from the ten lost tribes of the House of Joseph.

Ezekiel, symbolised on the front face of the pouwhenua by the mokomoko – lizard- is the kaitiaki or guardian of the two sticks, seen bound together on the other side. 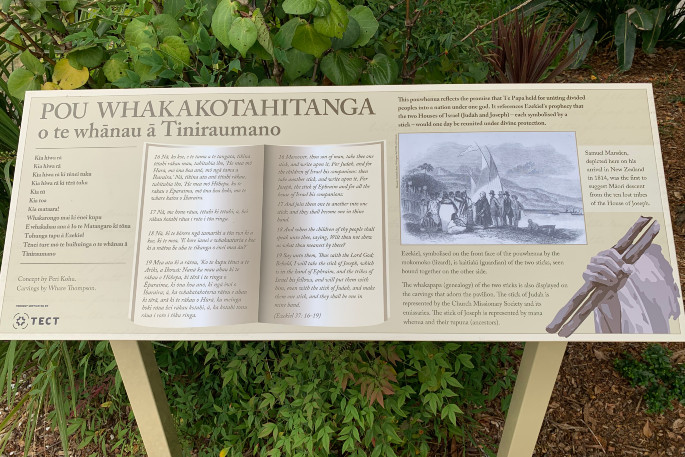 “The Garden will bring people from different cultures, nationalities and age groups together, to engage with each other in meaningful ways. We can’t wait for visitors to enjoy it as part of their visit to The Elms,” says Andrew.

To learn more about The Elms, and to plan your next visit, check out www.theelms.org.nz 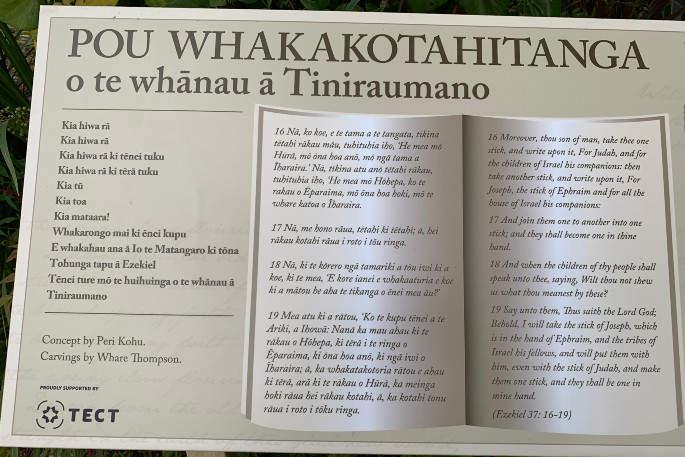 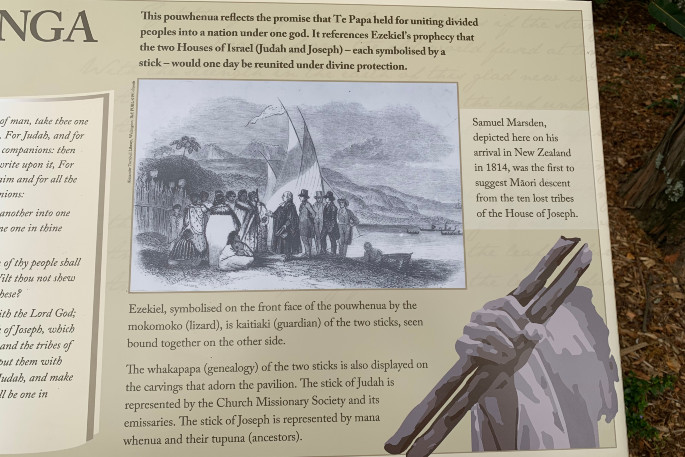