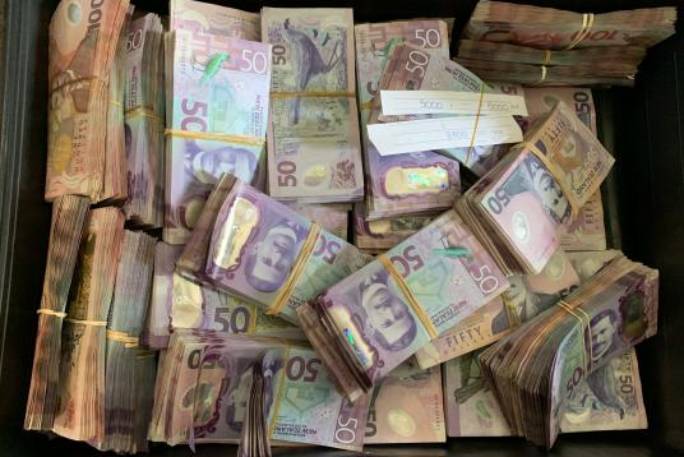 Some of the seized cash. Photo: NZ Police.

The warrants, which were carried out on Thursday, were the second phase of an operation targeting organised crime which originated from the arrest of a man for significant methamphetamine offences in February.

More than 70 police staff, including the Asset Recovery Units from Tauranga, Waikato and Auckland were involved in the operation.

In excess of $1.5 million dollars in cash was seized along with six high end vehicles and one high end motorcycle.

Two firearms, a cannabis grow room, cannabis and methamphetamine were also located and seized from an address in Whakatane.

They have been remanded to appear in Court at a later date.

“These people have attempted to increase their own personal wealth and social status through the supply of narcotics, offending that contributes greatly to the misery and social harm of others," says Inspector Phil Gillbanks.

"Through the dedicated work of investigators police have successfully been able to seize and remove these ill-gotten status symbols of perceived success.”

“Profits are what drives organised crime, therefore we will continue to target this motivation for people to become involved in such crime.”

Anyone with information about illegal drug activity is asked to contact Police or phone Crimestoppers anonymously on 0800 555 111.