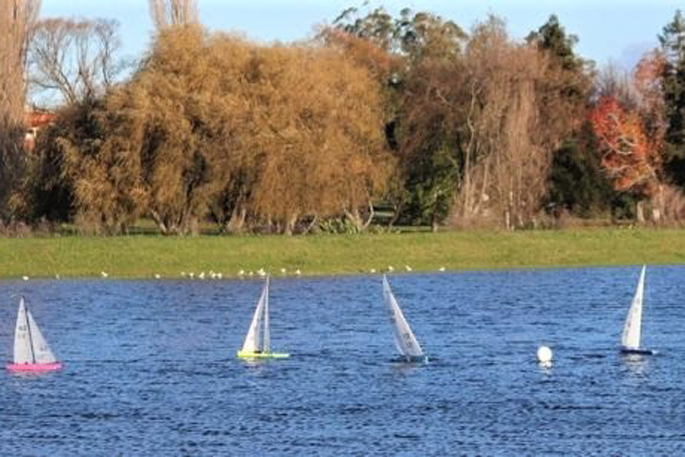 Recent rain has turned the Highfields stormwater pond into a recreational lake and Katikati locals have been quick to make the most of it.

Local members of the Tauranga Radio Sailing Club set their craft on the pond and have nothing but praise for the new boating landmark.

Club Commodore David Hemsley from Katikati says if the lake becomes a permanent feature there’s no limit to the boating activities that would use it.

“This lake is a godsend for Katikati – it would be the perfect place for the Sea Scouts, kayakers and other boating clubs to teach children the art of sailing, water safety and the thrill of getting out on the water.”

The lake will also be a great facility for other non-powered sailing craft such as kayaks, paddle boards and canoes.

Birds have taken advantage of the new habitat. Ducks have taken refuge during the duck shooting season and pied stilts, spoonbills and white faced heron are among those settling on the lake.

However the pond’s permanence depends on whether the lake passes current testing of water levels for engineering and technical safety.

Western Bay of Plenty District Council is assessing the pond’s technical viability and testing any impact water levels may have on the stopbank and the adjacent housing.

Trialling is being done on the water levels to assess whether there is any increase in groundwater levels beneath the nearby houses.

Council engineer Peter Clark says time will tell if it can be a permanent local lake.

He has had many positive comments from people about the pond and says the sailing club’s session last week shows how the pond can be used by the wider community.

“Word soon got around that the boats were out on the lake and other locals started turning up to have a go. They had a fantastic session – it’s great to see the pond being enjoyed,” says Peter.

The pond was originally developed to catch sediment during the construction phase of the first part of the Highfields subdivision.

The idea for the lake was initiated by Katikati resident Jim Davison seven years ago. Council furthered the project and commissioned engineers Tonkin Taylor to undertake a feasibility study.

Over the last three years several stages have been completed. These include the initial engineering feasibility study, followed by geotech work to determine the viability of permanently raising the water level by a nominal one metre behind the stopbank.

Bores measure the ground water levels starting with ‘no water’ in the proposed lake and further measurements will continue while the lake is filling.

It is planned to raise the water levels by 0.5 metre at a time, holding the initial level for a time while monitoring for any changes. If the technical evidence shows little or no effect, it is likely the water level will be raised to the next level.