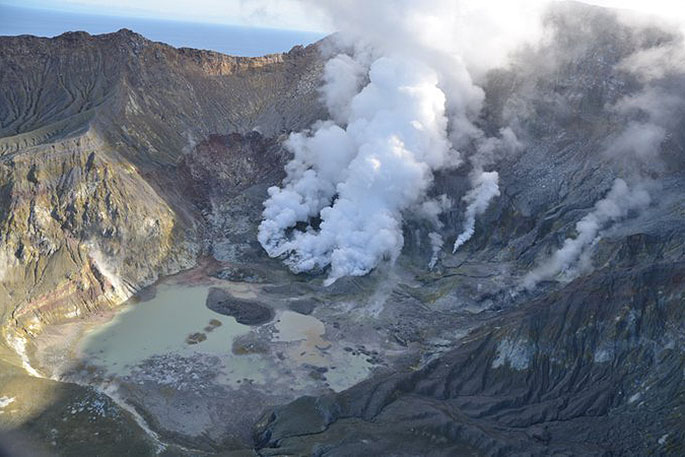 Scientists have recorded a short-lived gas pulse that passed through White Island from depth.

This gas pulse was accompanied by minor ground uplift in the vent area last week and is likely linked to a fresh batch of magma at shallow depth below the volcano.

"New observations and measurements were made during gas and observation flights over Whakaari/White Island in the past week.

"The observation flight showed continued high heat flow in the crater, while other activity largely remains within the range observed over the past few months."

Results from the gas flight on Wednesday, June 3, show a decline in gas flux from the high levels recorded on a previous flight on May 28, suggesting that the increased gas flux was short-lived.

"The May 28 flight recorded high gas flux values, similar to what we recorded in June 2019.

"Gas flux increases are attributed to the intrusion of a new batch of the magma at shallow depth beneath the volcano."

While previous observations indicated a trend towards background levels that are typical for this volcano, this short gas pulse serves as a reminder that the volcano is still in an elevated state of unrest with shallow magma present, says Craig.

Satellite-based measurements of ground deformation show the ground around the active vent area has overall subsided by several centimetres since the December 2019 eruption.

However, the most recent data from last week showed a small, localised inflation in the vent area, most likely related to the observed increased gas flux.

"Thermal infrared images taken during the observation flight on Wednesday, June 3 show that the lava lobes (extrusions first observed in early January), are still very hot, at around 450 °C. Recent rainfall has increased the steam emissions and some water has ponded on the crater floor.

"We are still observing occasional episodes of slightly elevated tremor, albeit overall tremor levels remain low and within background levels for the volcano. An eruption could occur with little precursory activity. Plausible triggers for an eruption remain the collapse of unstable material around the vents, sudden release of gas from the magma, and the rapid ingress of water onto the shallow magma body.

"Should any explosive activity produce an ash cloud, the likelihood of ash affecting the mainland remains very low. Under suitable weather conditions, the gas and steam plume may be noticed on the mainland as weak acid rain."