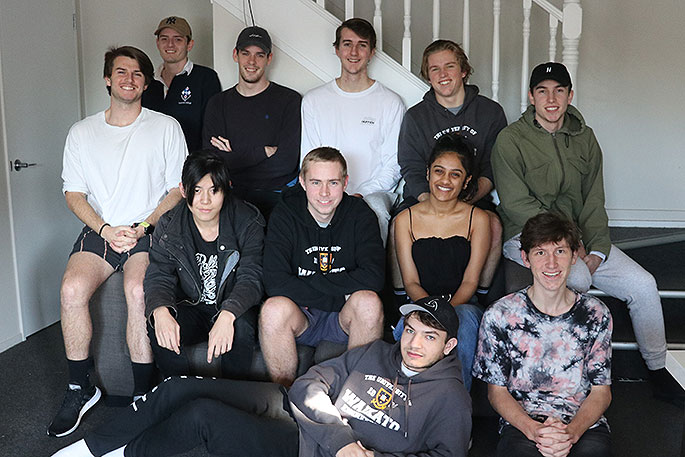 Ten University of Waikato engineering students and one design student, shared a study bubble during the COVID-19 lockdown.

In February 2019, 14 engineering students started their studies at the University of Waikato in Tauranga.

Most of them hailed from the Bay of Plenty and were glad of the opportunity to stay and study at the newly-built CBD campus.

Ryan Henderson had already made the decision to study civil engineering at Waikato while in year 12 at Tauranga Boys’ College.

He was initially set on enrolling at the Hamilton campus, until his mum spotted a Facebook advertisement promoting the Tauranga campus development.

“With the campus due to be ready the year I was heading off to uni, it was an easy decision,” says Ryan.

“It meant I didn't have to move away for my first year and, by staying at home, it saved me money in accommodation costs.”

Reaping the benefits of the enviably relaxed lifestyle in Tauranga, while enjoying world-class university study, was a drawcard for many 2019 first-years.

The engineering students also appreciated the modern learning environment and state-of-the art facilities, and benefited from increased one-on-one contact with their lecturers, Dr Chanelle Gavin and Dr Ajit Pal Singh, themselves both new to the Tauranga campus.

“They were knowledgeable, approachable, and always happy to make themselves available to go over something if you needed extra help.”

While a couple of the students knew each other from high school, for the most part they started out as complete strangers.

Being part of a small class cohort meant they weren’t strangers for long. The group quickly developed a firm friendship and became a familiar sight - studying, lunching and socialising together.

Trips across the Kaimai ranges to meet and mingle with their Hamilton counterparts, were a chance to connect with the lecturers they’d have for the next few years of their studies.

“Dr Gavin wanted us to be familiar with the facilities and staff at the Hamilton campus so we’d be more confident when we started there,” says Nick.

With the School of Engineering’s extensive networks, there was no shortage of industry engagement with representatives keen to offer their insights into the profession.

Regular interactions with the local branch of Engineering New Zealand (ENZ) provided valuable learning and networking opportunities for the students throughout the year.

Like all good things though, the first year of the Bachelor of Engineering (Honours) eventually came to an end for the Tauranga crew.

When it was time to make the move to continue their study journey in Hamilton, most of them were keen to stick together.

“We wanted to go flatting and since we’d spent a year together and got on well for the most part, it was a no-brainer to find something together,” says Edward Overell.

Nick kicked off the flat-hunting for his group and found the perfect six-bedroom house in Hamilton East.

When he saw the place next door was up for rent too, Nick put in a good word to the landlady, made a call to his mate Cameron, and 11 engineering students, plus one design student, went from being good friends to good neighbours.

Cameron set up the next door flat with John Hewlett, Lewis Hope, Edward Overell and Dharna Sofat, plus third-year Bachelor of Design student, and mate of John’s, Zac Holley.

In March, when the country went into Covid-19 Alert Level 4, instead of heading back to their respective family homes, all but one of the flatmates opted to stay put in Hamilton. Both flats made the call to merge and become one big bubble.

“We thought it would be easier to stay so we can study together as the online learning experience was going to be new and difficult for all of us,” says Dharna.

Generally, everyone’s families were happy with the arrangement.

“My family knows my friends are good people and knew we’d look after each other,” says Zane.

“We are all students who try to perform with good grades and we all have our own goals to accomplish.”

According to Ryan, aside from a bit of light-hearted pranking, the group kept up a good routine of studying, doing chores and sharing cooking duties with a bit of gaming, binge-watching movies and Friday night social drinks thrown in.

When it comes to sharing memorable COVID-19 lockdown moments though, the flatmates are divided. Edward cites the home hairdressing episode, or “a job a butcher would be proud of”, as a standout. Suffice to say, most of the guys are now sporting closely shaved heads.

One thing the group can all agree on is that while they look forward to returning to ‘normal’, getting back on campus and into the labs again, they reckon they coped well during the ‘unprecedented times’, says Ryan.

“The major benefit was having friends around you that are synonymous to being family.”

Plus, undoubtedly, a shared love of engineering. Their combined skills were put to good use for a bit of down time DIY.

“We do have a sick TV stand setup assembled of beer crates,” admits Cameron.

In 2022, the Tauranga engineering cohort will have the choice to complete their final year of their degree at the Hamilton campus, or return to Tauranga. There’s plenty of time to make that decision but Ryan already sees the benefit in returning to the Bay.

“With the increasing population in the Bay of Plenty, there's a lot of work to be done on infrastructure. From a civil engineering perspective, there should be plenty of opportunities to build my career. I’d be keen to increase my networks there while I’m finishing off my degree.”