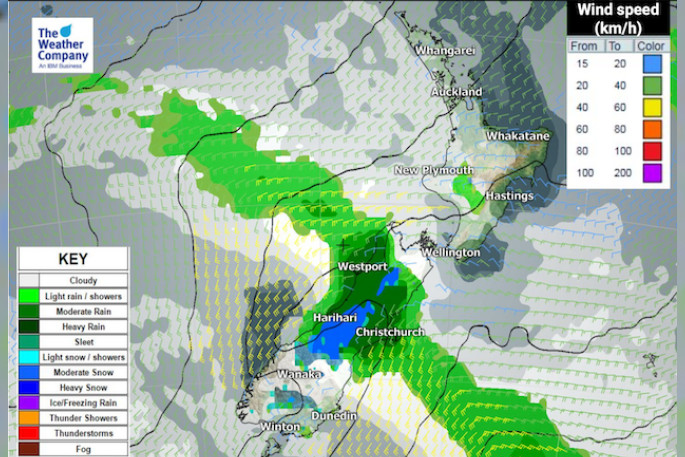 WeatherWatch reports that a southwest change to the weather will push northwards over the South Island today before moving onto the North Island this evening and overnight.

In Northland, Auckland, Waikato and the Bay Of Plenty, the weather is forecast to be partly cloudy, with a shower or two at times.

The temperature high for the Bay of Plenty today is expected to be 16-17 degrees.

In the western and central North Island, some cloud, with a risk of a shower and westerly winds is forecast. Evening rain will develop with a southerly change then easing overnight. Snow flurries should lower to 600-700m overnight before easing, with a high of 12-16 degrees.

The WeatherWatch forecast for the rest of the country is as follow:

Canterbury
Sunny at first then rain spreads northwards late morning as a southwest change moves through. Snow lowers to 400 or possibly 300m before clearing. Rain clears at night.
Highs: 8-10

West Coast
Morning rain clears South Westland, showers turn to rain further north in the morning then clearing in the evening. Southwesterly winds pick up then ease later in the day.
Highs: 10-12