First half of June dominated by high pressure 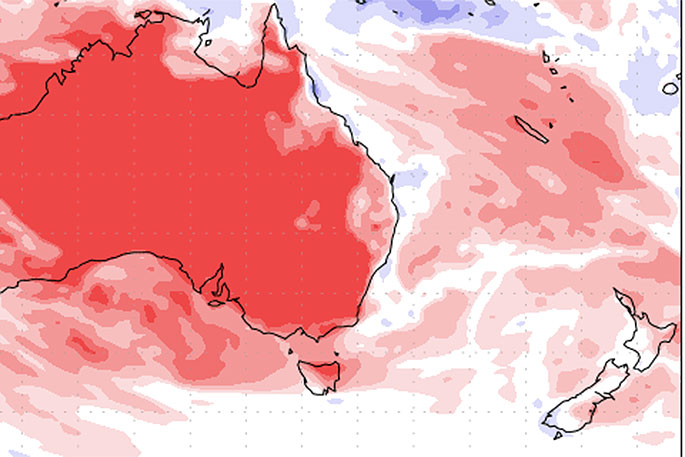 The next 10 days will see average to below average rainfall right across most of Australia, New Caledonia and a large portion of New Zealand, as another enormous high pressure system moves through Australasia.

In what seems to be the new norm, highs are parking over Australia for weeks and, at times, extending out over the Tasman Sea and across New Zealand.

High pressure will be out over Aussie for another week, with NZ on the outer colder edges, says WeatherWatch.co.nz

The start of this cold change is today and peaks on Friday, Saturday and Sunday encouraging cold weather over the South Island in particular - and some lower level snow flurries, maybe to 300m or briefly below that (won't accumulate to much or linger).

Over the next week some regions have normal rainfall for this time of year, like Southland, the West Coast, Wairarapa, Manawatu and Taranaki. All other NZ regions lean drier than normal.

The high itself won't be over the top of us, instead it flirts with NZ and brings cooler winds and showers for the next week. It may cross us next weekend or around then. This transition means initially we have cold winds, then they turn more westerly and a little milder next week.

"This high is a big one. It's affecting thousands of kilometres of weather and for New Zealand will see more southerlies, sou'westers and westerlies over the next week - and plenty of showers in the south and south west of both islands," says WeatherWatch.co.nz head forecaster Philip Duncan.

"As our recent June outlook indicated, many eastern areas will lean dry while western areas saw more normal rainfall in the form of showers."

Philip says the upper North Island will again lean drier than normal - including Auckland and the ongoing water shortage.

"The pattern bringing dry weather to Auckland in June is the same one that started the drought in the first place in spring 2019."

He says when this high moves through in mid June there may be a more humid, wetter, northerly quarter flow that develops for a time. It's too early to lock in.

"But we'll be closely monitoring for rainfall potential in the weeks ahead."