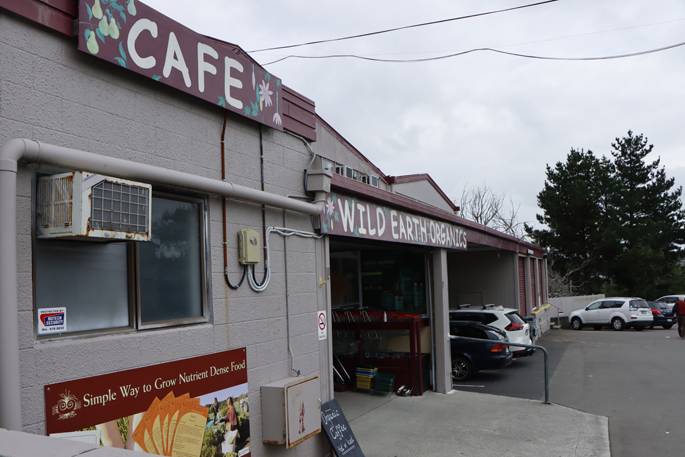 A Tauranga women who lives an organic lifestyle is disappointed by the closure of Wild Earth Organics in Tauranga.

The organic grocery store closed on Friday and the café is relocating to Huckleberry, in Mount Maunganui.

Jude Hall is not happy with the relocation because having to travel to Mount Maunganui goes against trying to live a sustainable lifestyle.

“I can drive to the Mount and pick it up, but actually that goes against my grain because part of having organics is lessening the impact on the land as well as the better health value. I can't justify driving to the Mount in one car to pick up organics.”

Group CEO for Huckleberry Pablo Kraus says Wild Earth Organics has been a longstanding and integral part of Tauranga’s community.

“We have been a proud part of that journey and do acknowledge the burden we take upon ourselves with this decision to close.”

The closure of the store has occurred because issues were identified with the condition of the building and when the issues were presented to the landlord they decided not to spend the money to bring it up to a safe standard, says Pablo.

“With the building warrant of fitness recently lapsing, it has resulted in our lease coming to an end sooner than expected.”

He says they take the health and safety of their employees and staff seriously.

Wild Herbs natural health store next door to Wild Earth Organics is remaining open and Pablo says they will provide some essential grocery items there.

They are also looking at making Wild Herbs a pick up point for Huckleberry orders for those not wanting to travel to Mount Maunganui, he says.

Closing Wild Earth has resulted in 16 roles being made redundant and three people were redeployed to Wild Herbs or Huckleberry, says Pablo.

Jude says a lot of people shopped at Wild Earth not just for the organics but because the staff are so helpful and friendly.

“They're passionate about organics, it's not just a job for them.

Pablo says their priority was to find redeployment options and to ensure fair compensation.

Having shopped at Wild Earth for more than six years Jude would have liked to see the store relocate within Tauranga.

Pablo says at this stage, with so much uncertainty in the world, it’s difficult to uplift and simply relocate to a new site.

He is thankful they’re able to continue serving their customers through the other two locations.

“I really do wish there was a simple way to remain open and serving the community.”

Well there is always a bicycle

or carpool or grow her own food if she puts the location of an outlet so high in her priority list that she has to take her woes to the media.

In my opinion these comments by Jude Hall are unfair re the movement of this business just because it does not suit her. I had no idea where or what this business was so I googled it and read a great story about how it had been a long time struggle to survive and only in the last few years was viable. Add in the recent lockdown and the information provided by the owner re the building not up to wof and the lease etc it sounds a no brainer to relocate. I struggled with my own business just due to road closures in town, I know the feeling, rates rent wages power water insurance advertising etc etc. I couldn’t help thinking why doesn’t Jude start her own from very small beginnings and fill the gap that may be left.