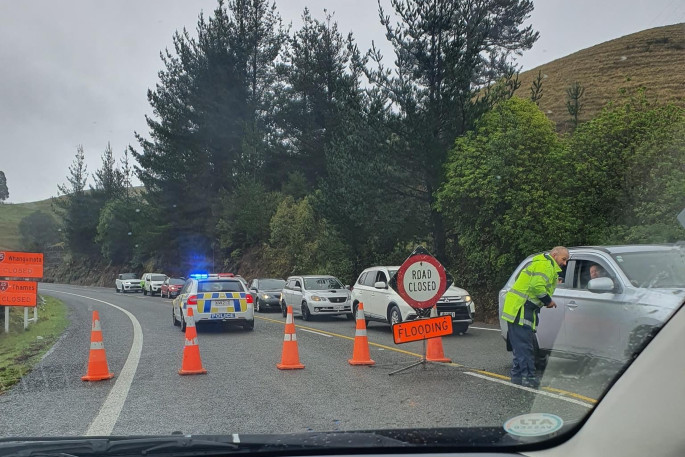 Some roads were closed in the Coromandel due to flooding. Photo: Abby Morris.

Wet and wild weather for the first holiday weekend out of lockdown flooded roads and caused slips in the Coromandel.

It meant some took hours-long detours and others stayed on for a night or two extra rather than brave the weather.

Almost 500ml of rain fell in the Pinnacles over 48 hours, and 230ml in the town of Whitianga - peaking at 50 ml in a single hour around midnight on Saturday.

"We're across the road from the beach, and the surf was so loud it sounded like we were right next door."

He says it's not traditionally a busy weekend for them but it seemed people took the excuse to getaway.

"We didn't have too many bookings, but we actually just had a lot of people turn up. We earned some money we really weren't anticipating, so that's all good."

Not far south at Hot Water Beach, Vivian Bongard says travellers made the most of the wet weather.

"Most of them had a great time. Heaps of them went to the beach and the hot pools. Nothing dramatic here, other than a lot of rain."

She says some opted out of battling the rain on the roads.

"There are a couple of people staying another night - more so because they can't be bothered driving in the bad weather home, and tacked on another night."

State Highway 25A, one of only two roads in and out of the peninsula, was closed yesterday and overnight due to flooding. It forced those leaving to take the long scenic route north around the tip of the Coromandel, adding a few hours to the trip.

A fallen tree temporarily blocked a road earlier in the weekend but was cleared quickly.

New Zealand Transport Agency systems management Waikato manager Cara Lauder says no other issues were serious enough to close any roads, but the rain and wind did make a mess.

"There are a lot of slips and little bits of rock on the road, one part of the road where we've actually lost a shoulder, a couple of culverts are blocked.

"It is definitely a reasonable weather event; the Coromandel is feeling it."

State Highway 25A / Kopu-Hikuai Road has now reopened, but motorists are still being advised to drive with care as there may be debris and surface water.

Meanwhile, salvagers will not be able to reach a longliner fishing boat listing at its mooring in Whangamatā Harbour until the weather improves.

It has about 500 litres of diesel aboard, which has been leaking.

Metservice forecaster Sonja Farmer says the South Island was largely spared. But as this system slopes off to the east, another low-pressure system is travelling in from the Tasman, so the country may not be dry for long.

And here's your outlook for Tuesday. A cold start, but a lot more sunshine in the North Island than we've seen for the last couple of days. The lower South Island continues its run of sun, but high cloud sneaks across in the afternoon. ^TA pic.twitter.com/dIROHkZzxG

"We've got some drop in temperatures as well later in the week, as well as the rainfall."

The rain was welcome for those in the driest areas, however, more is still needed for those in drought. But a weekend's worth - with more on the horizon - is progress