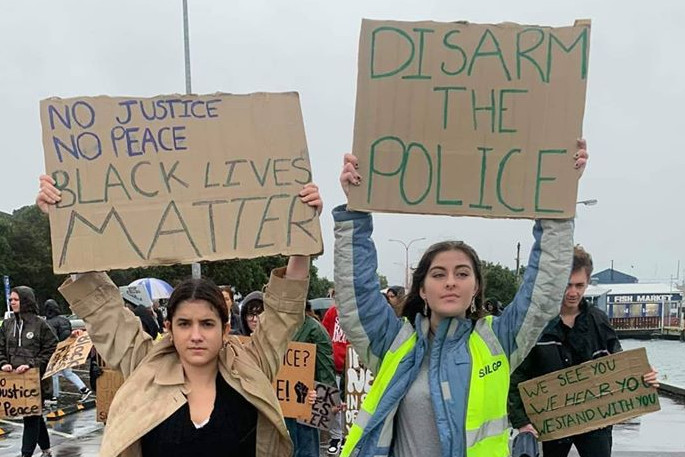 A Black Lives Matter march was held in downtown Tauranga this afternoon with about 25-30 people meeting in the rain to stand in solidarity with other groups across New Zealand.

Organised by Cheree Gray, age 14, and Serena Sanchez, age 16, the local crowd gathered at 3.30pm on The Strand and marched with placards ‘from the angel wings painting on The Strand to the Railway Crossing’.

“We organised a peaceful protest in honour of George Floyd,” says Cheree.

The signs have ‘No Justice no peace’ and ‘Black Lives Matter’ and ‘Disarm the police’.

“It’s important to recognise the lives that have been lost in the last 400 years,” says Serena. “The injustices needs to stop right now, and we’re here to stand in solidarity for everyone who has lost their life, and everyone who is afraid to walk out of their house every day because of this.”

“In our schools, and in this protest. Some of the people in these cars have yelled at us. It’s engrained just like in America,” says Serena.

“We are showing up and standing up across Aotearoa New Zealand - Auckland, Christchurch, Dunedin, Wellington, Palmerston North, Waitarere, Hamilton and Takahiwai - to recognise that what is going on in the US is not only about George Floyd,” says BLM Solidarity Auckland Spokesperson Shalane Williams.

Shalane says that the Black Lives Matters Solidarity Auckland Group acknowledges the legitimate grievances that the black community has in the US and stands in solidarity with them.

“This has been an ongoing epidemic which has seen the consistent persecution of the black community. The same white supremacy that has led to the disproportionate killing of black people in the US by police exists in NZ today.” 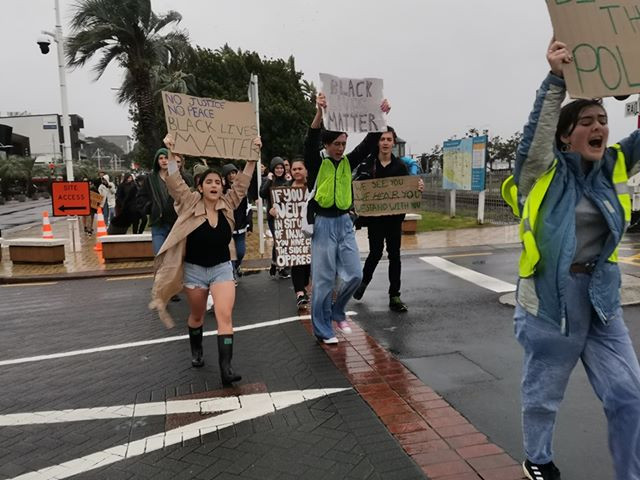 The group are keen to focus on that this is not just an American issue, but a humanitarian issue.

“We want to draw attention to the fact that we pride ourselves on being a nation of empathy and kindness and the deafening silence from the government and media does not reflect that. In fact, it is complicit in what’s happening.

“The intention is for this to be a peaceful and respectful protest. We are simply here to draw attention to the plight of our brothers and sisters in America and stand in solidarity with those in the NZ African Diaspora community who share in this trauma.”

The organisers are thinking they will plan another protest.

“We want to keep bringing the Tauranga people out. I think it’s important to acknowledge that this is a great cause,” says Serena. 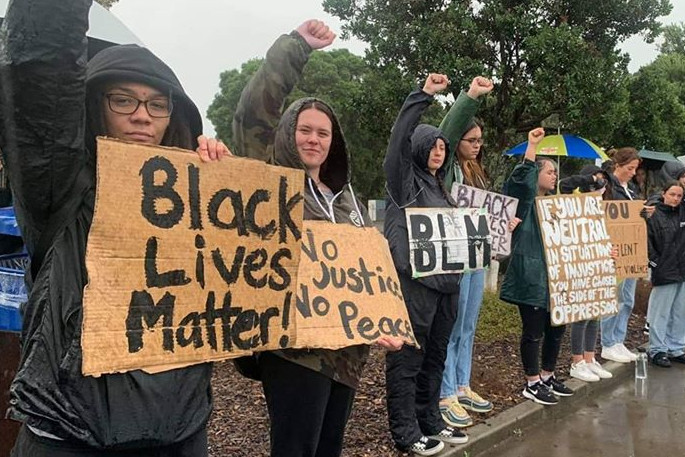 With morepork - As a NZer, I find this offensive, unhelpful, and qualifying as "hate speech". It denigrates NZ society and our Police force. (end quote of morepork) What an absolute insult. Not impressed at all.

How does Police disarmament come into this? Dis-leg would be more valid! The Puppet masters behind these girls obviously have a wider agenda.

"The same white supremacy that has led to the disproportionate killing of black people in the US by police exists in NZ today.” As a NZer, I find this offensive, unhelpful, and qualifying as "hate speech". It denigrates NZ society and our Police force. When was the last time you saw a Kiwi Cop put his knee on someone’s neck for 9 minutes? The majority of "white people" here are very happy to live in a diverse society. We trust our Police Force and occasional lapses are quickly dealt with. What happened to George Floyd is indeed shocking and they are dealing with it. There IS injustice and Racism here but it is being worked on and it is a small percentage of our people. To suggest that NZ is a "white supremacist" country is simply wrong at so many levels; non-white ethnicities are well supported by our nation.

If you must protest your time would be better spent protesting about cannabis law reform and the lowering of our standards and the extra burdens and trauma it will inevitably bring to society.

It take something in America to get people off there arses. We’ve got kids dieing every week here in NZ and none of you idiots are walking the streets chanting.

An extraordinary state of affairs. Unless you have been a recipient or witness too??? A person who does nothing (like the Asian police officer who, I presume has had racist insults) helps those in power

Totally agree with you. How dare these protesters compare NZ to what is happening in the States and blame our professional Police Officers of the same ruthless, murderous shooting of ’black’ people. You’d have done better to stand with signs that stated in memory of . . . with love. Racism is definitely there across ALL cultures and has been for centuries. No it doesn’t mean it’s right but getting your facts right would be a better step.

live by the law of the land.I dont hear anything about law abiding citizens being targeted by the police.

My Dad’s life mattered to me! He went into hospital with a NON Covid illness, caught the virus in hospital and we couldn’t even go to his funeral...........

This Should Concern Us All

Getting off the bus from Auckland after a Queen’s Birthday break I was drawn to the Strand by chanting, It turned out to be the tail end of this march. Despite the weather and a suitcase I didn’t hesitate to join them. What happened to George Floyd was an affront to humanity and I commend these young people for doing something about it. If further protest action is planned I intend being there and urge every adult who believes in justice to do likewise. Let’s show that in Tauranga also Black Lives...as do all lives Matter.

You will save more saveable lives in NZ by SOCIAL DISTANCING. That is not our battle, don’t waste your time complaining about something clearly out of your control