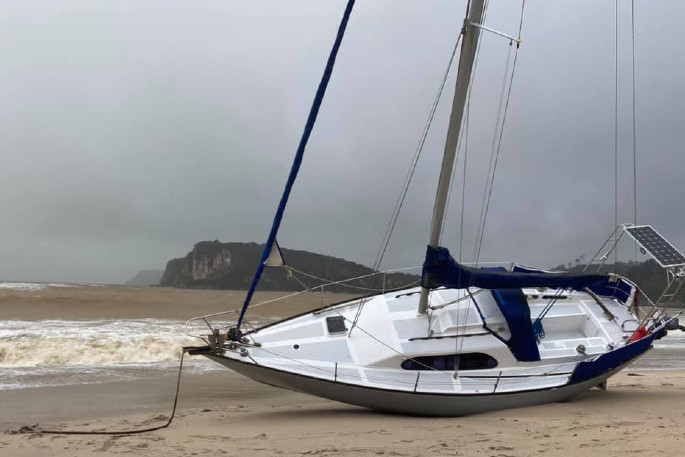 A yacht stranded on a beach in the Coromandel. Photo: Penny Yates.

A commercial long liner is listing in Whangamata Harbour but remains secured to its mooring with approximately 500 litres of diesel fuel on board, which is leaking into the water.

The regional council received reports about 8am of the long liner taking on water in the harbour and notified its regional on scene commander.

Coastguard travelled to the vessel and attempted to right it, but their efforts were stopped by significant wind and extremely choppy on water conditions and the crew were forced to return to shore.

Regional on scene commander Derek Hartley said the regional council is considering mobilising its marine oil spill equipment, but weather conditions at the moment would prevent the deployment of booms to contain the diesel.

“We have our Whangamata-based harbourmaster closely monitoring the situation from the shore. Unfortunately it’s just not safe to go out on the water at this time, with the conditions making it impossible for us to assess just how much of the diesel is spilling from the vessel into the water.

“But the good news at this stage is that the vessel hasn't sunk and, due to the volatile nature of the diesel, wind and tide conditions, the fuel is likely to disperse well with minimal ecological impact,” says Derek.

He explained that salvors are scheduled to arrive at the scene tomorrow, when weather conditions are expected to improve and enable the safe salvage of the vessel.

Meanwhile in a separate incident, the Whitianga harbourmaster is at the scene of a yacht grounding in Flaxmill Bay.

“The yacht is resting above the high tide line and has no fuel onboard, so it’s anticipated there will be minimal, if any, environmental impact,” says a council spokesperson. “Salvage experts have arrived on scene and are working on recovering the vessel and getting it to the Whitianga marina where it can be assessed for damage.”

A Heavy Rain Warning was issued for the Coromandel Peninsula. There was a break in the rain this morning, and another band came through around midday.

High tide is around 2.30pm on the Coromandel east coast and 3pm on the Firth of Thames. Waikato Regional Council staff are monitoring the Kauaeranga River and spillway on SH25 - the approach to Thames opposite the Sports Ground - closely.

On the Coromandel Peninsula there are multiple slips and other incidents, some of which have resulted in road closures. Motorists are advised to keep up to date with the latest information from Thames-Coromandel District Council and NZ Transport Agency Waikato BoP.